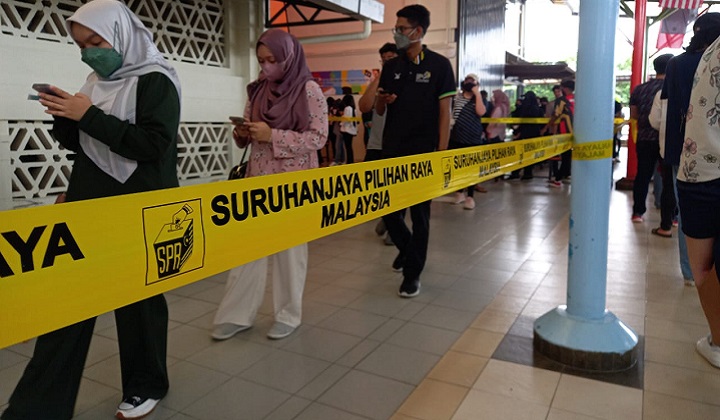 It’s voting day, finally! After two weeks of campaigning, Malaysians will elect a new government today as they hit the polls for the 15th General Election (GE15).

221 parliamentary seats are being contested today, with one (Padang Serai) postponed to 7 December. Meanwhile, there are also three state elections; Perak, Pahang and Perlis, as well as one state seat contested in Sabah (Bugaya).

We’ll bring you the highlights of what’s happening across the country as polls opened at 8am and closed at 6pm.

6.00pm: That’s a wrap! The polls are closed. Thank you for voting, Malaysia!

5.30pm: More than 13.7 million Malaysians have voted today, and this figure exceeded GE14.

5.28pm: Twitter user Thevesh Theva, who is an economist and data analyst, says this is the HIGHEST EVER number of votes cast in a Malaysian General Election and could reach 80% by the end of the day.

5.24pm: Voter turnout at 3.00pm has reached 65 per cent, according to the Election Commission.

5.15pm: In response to a video being circulated that allegedly shows a polling centre in Kuala Pilah closed ahead of time, South China Morning Post reporter Amer Hadi Azmi points out that it was gazetted to close at noon, but adds that the Election Commission should have better informed voters.

5.11pm: The Election Commission (EC) says that voting for the Baram parliamentary seat has been suspended due to weather conditions making it impossible for poll workers to reach polling centres despite trying by air, land, and water.

The EC says a new polling date will be announced when it is safe for poll workers and voters to reach polling centres.

5.10pm: The MySPR Semak site and mobile app received over 2.5 million hits per second, which has caused loading failure for many voters. Voters who need to check their details can do so by calling 03-88927218 or they can proceed to the voting centres.

5.00pm: With ONE HOUR left to vote, BN’s Sungai Buloh candidate Khairy Jamaluddin is urging voters to hurry before it’s too late.

4.45pm: A voter arriving at the SK Tambun polling centre. This school has about 3.5k voters, more than 2k have voted with about 940 more to go.

4.15pm: Chung Kui Ching, the oldest Malaysian to be vaccinated last year, voted in Likas, Kota Kinabalu. She is 102 years old and said she has voted 15 times.

4.15pm: Pas president Tan Sri Abdul Hadi Awang is getting slammed on social media after photographs were shared of him casting his vote while wearing a vest that had a Pas logo on it.

Electoral watchdog Bersih has also urged the Election Commission as well as the cops to take action.

They urged the authorities to investigate under Section 26(1)(g) of the Election Offences Act 1954, which says that voters are not allowed to wear, hold or carry any form of clothing or item which shows the name of a candidate, emblem or symbol of any political party while voting or within 50m of a polling station.

Those who don’t abide by the law can be punished with jail time of up to one year and a fine of up to RM5,000, or both, upon conviction.

3.38pm: It took 10 minutes from drop off to complete the whole voting process for the senior citizen stream at the SK Seri Kundang polling centre for the Selayang parliamentary seat.

3.34pm: Twitter user Thevesh Theva, who is an economist and data analyst, says that based on the data, voter turnout as of 2.00pm today with 4 more hours till polls close has equalled the entire polling day of GE14.

3.28pm: Voter turnout at 2.00pm has reached 58 per cent according to the Election Commission.

3.15pm: A TRP editor and his wife who voted in different polling centres were over-excited and experienced a communication breakdown.

3.11pm: The Borneo Post reports that voters in Baram, Sarawak, are braving flood waters and travelling by boat to cast their vote. No polling centres were closed despite the challenges faced.

Photos of voters queueing up in floods have been shared on social media and chat groups.

3.00pm: This is a reminder that there are many companies offering promotions for people who have voted. We’ve compiled many of them for you HERE.

2.55pm: Weather is getting cloudy in the Kuang area, under the Selayang parliamentary constituency. It was bright in the morning but MetMalaysia’s forecast says thunderstorms are expected in a few areas in the afternoon.

2.52pm: Twitter user Thevesh Theva, who is an economist and data analyst, has visualized voter turnout today, and compared it to GE14.

2:30pm: Today’s Google Doodle is a ballot box, by the way. How many politicians are feeling lucky?

2.15pm: Queues have dispersed at many polling centres, such as this one at Sekolah Kebangsaan Bukit Rahman Putra in Sungai Buloh. (Pics by Andrew/TRP Reader)

1.45pm: A voter who wished to remain anonymous told TRP earlier that he waited for 30 minutes to refuel his car at the Sungai Buloh rest area along the North South Expressway. After voting in Klang, he is now heading to Tambun to send his wife to fulfill her voting duty.

1.40pm: May the force be with us all. Voters seen waiting for their family and friends to perform their civic duties at SK Seri Cahaya in Shah Alam earlier.

1.30pm: Voter turnout at noon was 42 per cent – Election Commission.

1.00pm: The Tioman state seat election has been postponed to 7 December, as informed by the Election Commission. This was after one of the candidates, Md Yunus Ramli, died at 3.30am today.

12.15pm: It’s a sunny Saturday afternoon! Citizens are all lined up to cast their ballots at the Sekolah Seri Cahaya, Shah Alam polling centre.

12.00pm: Before I do, I vote. A couple cast their vote at the SK Taman Sri Muda in Shah Alam polling centre before rushing off to their church wedding earlier this morning, as reported by The Star.

11.45am: Tun Dr Mahathir Mohamad and his wife Tun Dr Siti Hasmah Mohd Ali have both fulfilled their duties as voters at the SK Titi Gajah polling centre in Alor Setar.

The 97-year-old two-time prime minister is a candidate for the Langkawi seat under Parti Pejuang Tanah Air.

Meanwhile, Pakatan Harapan chairman Datuk Seri Anwar Ibrahim, who is a candidate in Tambun, Perak cast his vote in Permatang Pauh earlier this morning. According to Astro Awani, he was among the early birds at the SK Penanti voting centre.

10.54am: Those who are having trouble accessing the official EC voter registration website can try http://semak.info. However, there was a concern raised about data safety.

According to checks by Paul Tan (of automotive website paultan.org), it was set up by DAP.

10.35am: PH chairman Datuk Seri Anwar Ibrahim has released a statement that the coalition has received multiple complaints of voters being unable to access the voter registration website.

Anwar says the EC should have been better prepared to ensure a smooth voting process and has asked them to fix the issue immediately.

10.33am: Sungai Buloh candidate Khairy Jamaluddin is a registered voter in Rembau and he has just fulfilled his duty by voting at the SMA Hj Mohd Yatim polling centre in Kota, Rembau.

“Felt nostalgic going back but hopefully a new beginning today in Sungai Buloh,” he posted on Twitter.

Khairy was formerly the BN MP in Rembau but for this GE, he was moved to Sungai Buloh while Datuk Seri Mohamad Hasan is BN’s candidate in Rembau.

10.12am: A voter named Aisha Adam claims her voter information went missing and she was not allowed to vote in SK Setiawangsa. Checks by TRP show that she is a registered absentee voter, as she herself shared on 15 November and was not assigned SK Setiawangsa as her polling centre. However, Aisha claimed she had never registered as a postal voter.

9.25am: Checks show the website to check voter status, mysprsemak.spr.gov.my, appears to be down this morning, timing out and throwing up Error 504. However, voters can still check their status and streams at their polling centres.

9.16am: Long line for the Undi18 stream at the SMK Bandar Sri Damansara 2 voting centre where PH’s Gobind Singh Deo is facing Tan Gim Tuan of BN and Lim Si Ching of PN.

9:13am: Former Negeri Sembilan Menteri Besar and Umno deputy president Datuk Seri Mohamad Hasan, who is contesting for the Rembau parliamentary seat, arrived at the polling centre in SJKC Chung Hua in Rantau.

9.05am: There is a long queue at the SMK Bandar Baru Sri Petaling voting centre for the Seputeh parliamentary seat. It’s also beginning to drizzle.

8.50am: Situation at the SJKC Yuh Hua voting centre in Ipoh.

Early morning at the SJK(C) Chung Hua voting centre in Rantau, Negeri Sembilan where voters will elect a new parliamentarian for Rembau. Formerly a Khairy Jamaluddin stronghold, he had to give it up for Umno deputy president Datuk Seri Mohamad Hasan who will face Jufitri Joha of PH, Nazree Yunus of PN, Ramly Awalludin of Pejuang and PSM’s Cikgu Tina.

8.45am: As reported by Sinar Harian, Perikatan Nasional (PN) candidate for the Tioman state seat, Md Yunus Ramli passed away this morning at 3.30am.

Md Yunus died while receiving treatment at the Rompin Hospital.

8.30am: The elderly and those with disabilities are among the early birds to cast their votes.

8.15am: The queue has started at the Sekolah Menengah Agama Sultan Hisamuddin in Klang.

It’s a 7-cornered fight for the Klang parliamentary seat:

8.10am: Astro AWANI interviewed Azwan Ali in Gombak, who held up a blue finger and said he was certain his brother, Datuk Seri Mohamed Azmin Ali, would lose.

He was also among the early birds to get in line at the SK Klang Gate voting centre.