Twitter is alive at this hour, with reports coming in of floods in Klang, Selangor, among others. 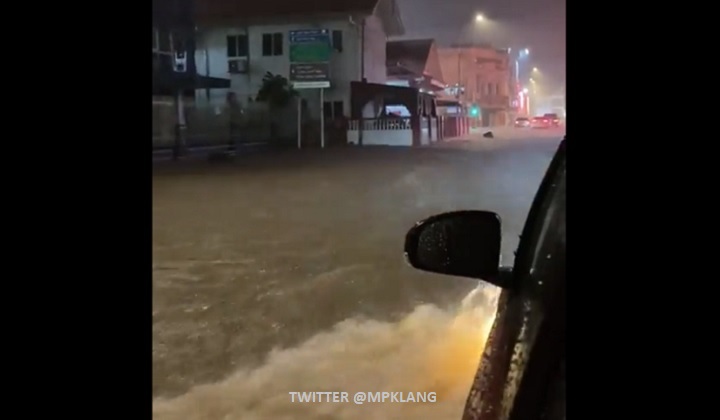 With the Malaysian Meteorological Department (MetMalaysia) having forecasted stormy weather late last night, some parts of the country are now experiencing floods.

Twitter is alive at this hour, with reports coming in of floods in Klang, Selangor, among others.

Former Klang MP Charles Santiago shared a flood video, saying he had been receiving calls from people in Klang who were upset and worried with the rain and floods.

The initial heavy rain alert came in last night with heavy rain predicted across the east coast and central parts of the Peninsular, as well as several areas up north.

Later on alerts were issued for parts of the west coast including the whole of Selangor, Kuala Lumpur and Putrajaya.

MetMalaysia issued an updated alert at 3.55am of heavy rain and thunderstorms in several parts of Perak, Kelantan, Terengganu, Pahang, Selangor, Putrajaya, Negeri Sembilan, Melaka, Johor and Sabah until 8am.

Meanwhile, as at 5.30am, according to the Department of Irrigation and Drainage’s (DID) PublicInfobanjir portal, nine rivers in Selangor have exceeded their danger levels.

In the district of Hulu Langat, Sungai Semenyih in Pekan Bangi Lama, and Sungai Langat in Bukit Changgang have also exceeded their danger levels.

In all these areas, rainfall is still ongoing at a light level.