Since the GE15 date was announced, unbecoming behaviours such as destroying campaign banners and spreading racist remarks have taken place. 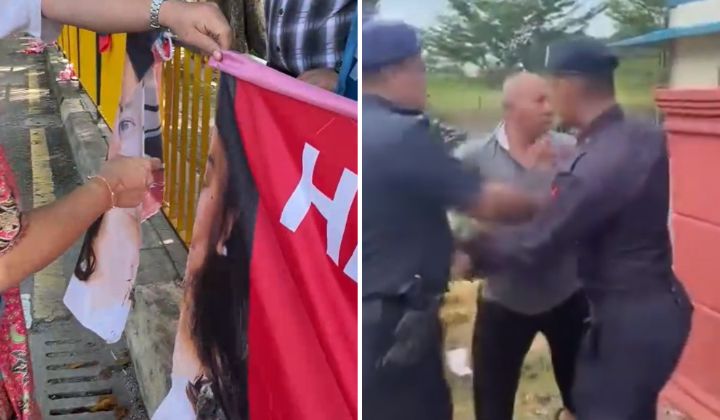 General elections can bring out the ugliness in people when they are ruled by their emotions.

In the lead-up to the 15th general election (GE15) this Saturday (19 November), there have been reports of people vandalising campaign materials, verbally abusing candidates and burning party tents.

Here’s a list of mischief that has been happening ever since the campaigning week started:

Several GE15 candidates from various parties have had their campaign materials such as party flags and banners vandalised.

The campaign materials were cut, torn, taken down, scribbled on, or even burned.

In no particular order, the candidates who have faced this and reported the incidents include:

In other instances, individuals have taken it upon themselves to remove buntings in areas such as Batu Pahat and Santubong.

A MIC operation tent along Jalan Mutiara 1 in Taman Mutiara, Johor was set ablaze by an unknown man.

The 28-year-old suspect was drunk and lit the tent using a lighter and has been arrested by the police.

According to the New Straits Times, the case is being investigated under Section 436 of the Penal Code. Upon conviction, it carries 20 years of jail time and a fine.

Two individuals confronted Maszlee outside the building and called him a “liar.” Maszlee has also apologised for using hurtful language during the confrontation and had forgiven the individuals.

A few GE15 candidates have made remarks that were racist in their campaign speeches. Sik PAS Youth chief Shahiful Nasir and actor Zul Huzaimy are under police investigation for the remarks they’ve made.

The Edge reported that both men are being investigated because their remarks could threaten public order.

Shahiful reportedly said those who vote for Pakatan Harapan and Barisan Nasional would end up in Hell.

He has since issued an apology and has applied for leave from his duties and other party positions.

Meanwhile, Zul allegedly said he wanted to slaughter “kafir harbi” (enemies of Islam) during a speech in Kemaman, Terengganu, on 4 November.

Zul also apologised in an Instagram video but claimed that his speech was taken out of context in the edited clip and asked people to watch the full clip again.