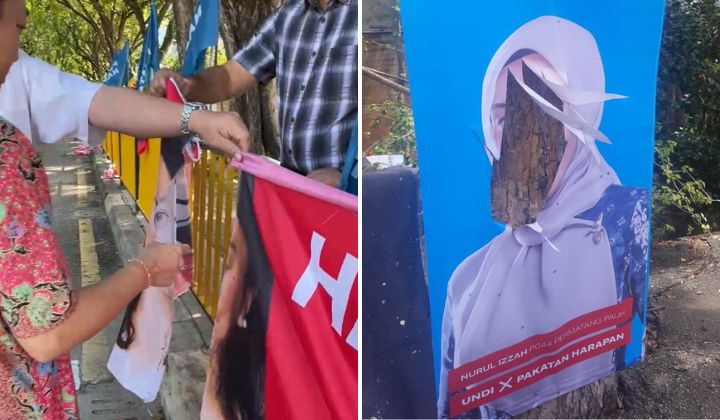 There are 11 more days until the 15th general election (GE15) and the political parties are racing to get their manifestos out in order to secure votes.

Unfortunately, there are a few irresponsible individuals who resorted to dirty tactics to sabotage the candidates they disagreed with.

Pakatan Harapan’s Segambut candidate Hannah Yeoh and Permatang Pauh candidate Nurul Izzah Anwar were alerted that some of their campaign banners and billboards had been vandalised.

Residents of Taman Tun Dr Ismail shared with Hannah images of her banners and billboards cut, torn and pulled down in several locations in the area.

In the press conference uploaded on Facebook, Hannah Yeoh took netizens on a walkabout showing the extent of the damage.

She said they had obtained permits to put up the political banners and billboards in these targeted areas and a police report will be lodged today (8 November).

In the other locations, the Pakatan Harapan flags were also cut and left discarded on the ground.

Hannah added that she hopes these irresponsible acts such as vandalism and dirty politics will stop and the election campaign will be clean, fair and just.

She also asked residents with CCTV cameras in the affected locations to send the clips to her to aid police investigation.

On Twitter, Nurul Izzah urged youths to build a mature political legacy and leave the hate culture behind.

Although the banner is cut, the spirit remains strong. InshaaAllah.