Siti Kasim finds herself on the receiving end of a barrage of criticism after ‘missing the point’. 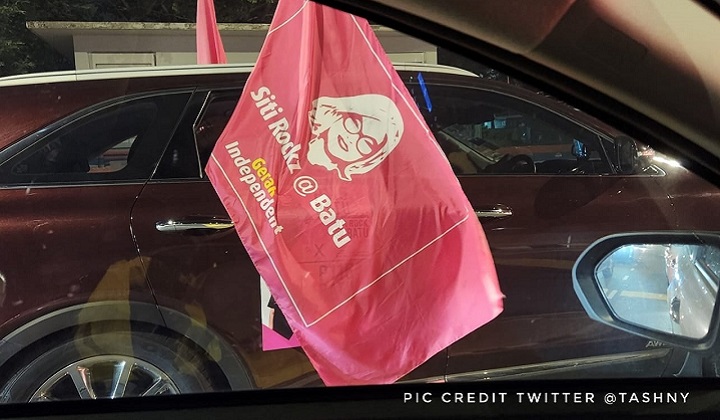 Being a politician is not easy. There may have been times we said to ourselves: I can do a better job. However, the reality is that it is not easy, especially if we do not know how to deal with the public.

For newcomer Siti Kasim, a small part of the Malaysian Twitterverse schooled her on handling criticism.

The lawyer and activist is an independent candidate for the Batu parliamentary constituency. Being her first election, and barely two days since campaigning kicked off, she found herself being on the receiving end of a barrage of criticism when a Twitter user pointed out that it was dangerous to carry a flag outside a moving vehicle convoy.

Replying to the feedback, Siti Kasim did not address the convoy issue specifically, instead thanking the Twitter user for her feedback in general and went on to address the ‘tacky flag’ bit in her tweet.

This did not sit well not only with Twitter user @tashny, but others as well who chimed in saying the Batu candidate failed to focus on the main point of the complaint.

One user asked if she could not comprehend the original tweet, and joked: ‘Muet band berapa ni?’ (What did you get for Muet?)

The Muet joke was in reference to last week’s Twitter drama where a user had posted that he was looking for a girlfriend but an optional requirement was that she scored at least a Band 4 for her Muet exam.

Others jumped in to point out to Siti that she had missed the point.

So what do you think? Is the flag tacky?