It’s believed a motorcyclist ran the red light and was hit by an oncoming Perodua Myvi near a petrol station in Taman Kota Masai. 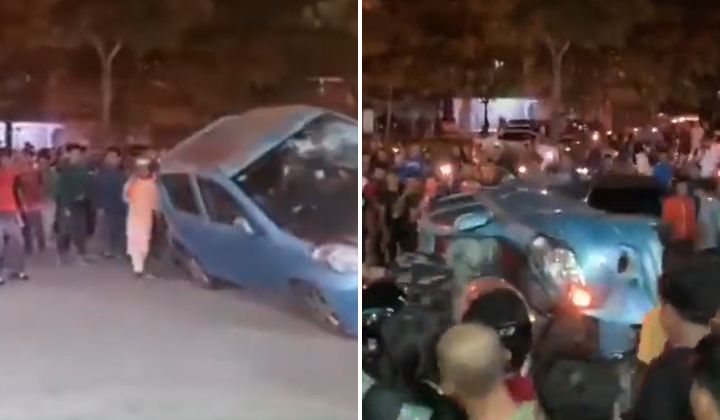 The police have arrested three individuals, aged between 17 and 24, involved in the fight that broke out near a petrol station in Taman Kota Masai, Johor, on Thursday, 3 November around 9.40pm.

They were arrested between 10.45am and noon on Friday around the Jalan Tembikai Taman Kota Masai and Jalan Bunga Raya Masai areas.

Based on the viral dashcam video, a motorcyclist is believed to have run the red light and was run down by a Perodua Myvi.

However, an angry group of unknown men decided to attack the 21-year-old Myvi driver.

One of the men continuously hit the windows using a helmet, and the car was eventually overturned at least twice by the mob.

The importance of having dashcam pic.twitter.com/gmPCPN7Hzq

Both the motorcyclist and the driver suffered injuries from the accident and are currently in stable condition.

The case is being investigated under Section 148/427 of the Penal Code for rioting and committing mischief and Section 43(1) of the Road Transport Act for careless and inconsiderate driving.

The police are still looking for the remaining suspects who are still free. Members of the public are advised not to take matters into their own hands but to leave it to the police to carry out their duties.