Activist Numan Afifi shared two pictures of the form that subjected those arrested with personal and humiliating questions. 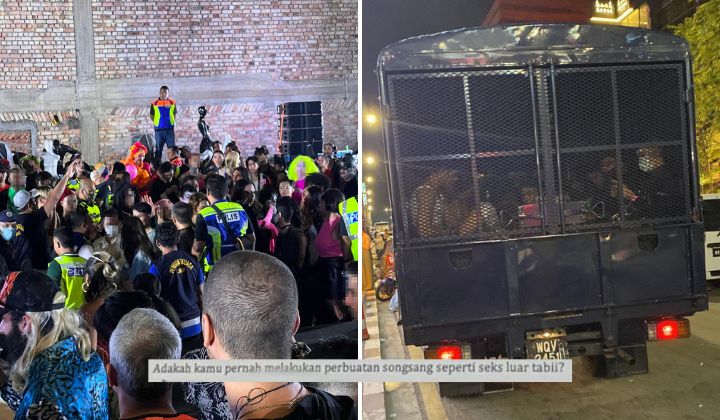 On the night of 29 October, guests at the Halloween private party ‘Shagrilla’ were raided by the police and the Federal Territory Islamic Religious Department (JAWI).

They were detained for allegedly promoting vice and for offences related to cross-dressing.

Activist Numan Afifi, who was among those arrested at the Halloween party in RexKL, revealed that party guests were allegedly subjected to humiliating and demeaning questions by the authorities.

Numan posted two pictures showing a section of the form on Twitter. Some of the questions asked were:

Ridiculous questioning by JAWI, ‘have you had unnatural sex’ or ‘have you taken hormone or had surgery’ or informally like ‘you’re straight, right?’ or ‘why is your voice like that’ https://t.co/PLCGvhtJla pic.twitter.com/wPmPl5hRg1

Numan added that those who were arrested were questioned for almost 3 hours. They were eventually let go but were told to return for investigation again at a later date.

He alleged that the way they were treated was pure intimidation and harassment from religious authorities.

In addition, Numan claimed the authorities treated the other guests at RexKL badly that night.

JAWI officers asked them humiliating and demeaning personal questions, some were hold up for questioning for almost 3 hours and were told to come in for investigation again on another date. This is pure intimidation and harassment from religious authorities. https://t.co/SQb2h7WLSn

The police was equally horrendous to other #REXKL patrons that night. While dozens were told to pee in cups, one activist sighted one handcuffed person by the police in a toilet, there was also account of one transwoman slapped by the police because she refused to pee standing.

Some netizens were shocked by the blatant hate from some parties and continued to condemn the raid. They said what transpired was akin to harassment against a marginalised community.

Life has always been tough on lesbian, gay, bisexual, and transgender (LGBT) members who persistently face persecution and discrimination in a conservative country.

However, the LGBT community is not alone because LGBT allies have voiced their support for the community and will continue to fight for human rights.

Netizens also praised the lawyers and doctors who stepped up to help the arrested guests that night.

Some worried that the recent invasion of the rights and space of the LGBT community will eventually happen to other communities too.

I am shocked at how much hate there is in Malaysia today towards the LGBTQ community. This has no doubt come about through years of vilifications from those in positions of power. If not nipped in the bud, the increasing hatred could eventually lead to violence.

I don’t think I realised how homophobic/transphobic Malaysian Twitter still was until I started reading the replies to tweets about the #REXKL raid. People saying that it’s “good” or “deserved”. Just disgusting behavior.

ning baizura bravely uploaded herself singing her song, pelangi untukmu, as a sign of solidarity & love for LGBTQ malaysians in light of the persecution at shagrilla last night. she has worked with many queer people in her life, those she adore & those who adore her. 🤍

This is why when people tell LGBTIQA people to keep quiet and wait for “other” political processes to fall into place are wrong.

All rights are connected.

If they can invade and erode queer spaces, they WILL erode and invade your community too.

what happened at REXKL is disgusting.