The UMNO veep said that the party wanted to ensure that no elected lawmaker will go rogue again as several did in the aftermath of GE14. 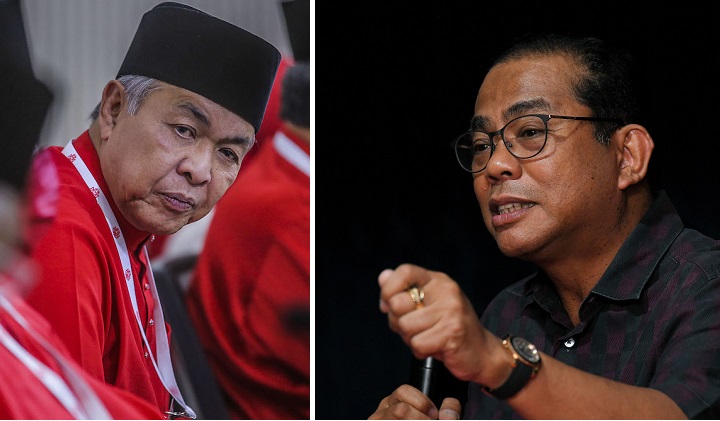 UMNO has decided to demand their election candidates to pledge allegiance to president Datuk Seri Ahmad Zahid Hamidi due to the painful lesson the party went through in the aftermath of losing the 14th General Election.

According to UMNO vice-president Datuk Seri Mohamed Khalid Nordin, 63, the party is not alone in doing so as it was also the requirement of other political parties that their election candidates must state their support for their respective party’s chief.

“About the support to the party president, other parties had done the same. UMNO had learned a hard lesson before this so we don’t want history to repeat itself (party hopping).

“Furthermore, UMNO has yet to amend the party constitution with regard to party hopping so we want to prevent this matter from taking place again.

“We don’t want to see another episode of lawmakers making a pact among themselves and failing to follow the party’s directive,” the former Johor menteri besar told TRP when contacted today.

He added that this is especially crucial if next month’s election ends up in a hung Parliament where no political party has enough seats to secure a simple majority in Dewan Rakyat.

Previously, The Vibes, quoting a source, reported that BN election candidates were allegedly required to sign documents to back Zahid as the prime minister.

“Itu tipu (It’s a lie),” the UMNO president was quoted as saying by Malay Mail.

Khaled also denied speculations that Zahid was making a run to become the next prime minister should Barisan Nasional (BN) manage to form the Federal government in the 15th General Election.

“We have to wait for the announcement (of BN candidates),” he said when asked whether it’s true that several UMNO heavyweights aligned to caretaker Prime Minister Datuk Seri Ismail Sabri Yaakob failed to make the list of BN candidates for GE15.

The rumours have further fuelled the speculation that Ahmad Zahid is aiming to become the next prime minister.

UMNO and BN had previously named Ismail Sabri, another UMNO vice-president, as the sole choice for the prime minister post should the coalition reclaim Putrajaya in GE15.

BN is expected to announce the full list of its election candidates for the parliamentary seats nationwide today at the World Trade Centre. The announcement is set to be made by Ahmad Zahid.

“Wait for the announcement before making any speculations, I think that those who are making these claims are only out to tarnish the party’s name,” Khaled said.

When asked about his candidacy, Khaled refused to confirm whether he will be fielded as the coalition’s candidate in this 19 November general election.

Khaled’s name has been bandied about as Halimah’s replacement for the Kota Tinggi parliamentary seat.

Meanwhile, outgoing Padang Rengas MP, Datuk Seri Mohamed Nazri Aziz, 64, said that in the past, the UMNO state liaison committee was the one tasked with selecting election candidates.

“I wouldn’t know about it, you have to ask them yourself,” he said when questioned whether it’s true that Ismail Sabri’s faction within UMNO will not be named as the party’s candidates in GE15.

“I’ve decided to take a step back so I don’t know about others,” added Nazri.

At least two Cabinet ministers – Shahidan Kassim and Annuar Musa – have hinted that they may not be picked to defend their parliamentary seats for UMNO. Annuar had also questioned the current UMNO process in selecting candidates.

“It was also promised that the (UMNO) Top Five would be given the authority to negotiate on behalf of the Supreme Council (which has the power to choose election candidates), but the Top Five members confirmed that the list was further filtered by the higher-ups,” Annuar wrote on his Facebook last night.

READ MORE: Several UMNO Heavyweights To Be Dropped For GE15?