The incident is believed to have taken place in a shopping mall in Kota Kinabalu, Sabah. 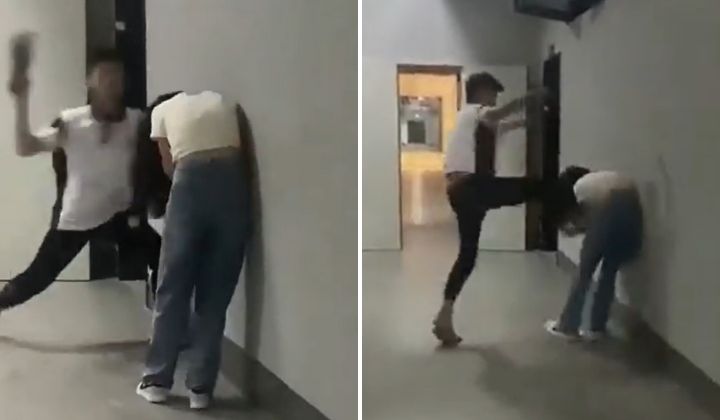 A viral video showing a woman getting kicked and hit by a man has incurred the wrath of netizens.

In the video, a man in a white shirt was seen cornering a woman against a wall and then hitting her over and over.

Despite her cries, he continued using a slipper to hit her head repeatedly even when she doubled over in pain and dropped her phone.

What’s also upsetting was that the person recording the video could be heard laughing while witnessing the assault.

Anyone ada more info on this? Please respond if you do 😰 pic.twitter.com/1aAGA44M6h

The shocking video also caught the attention of local entrepreneur Neelofa and director Michael Ang. Both urged anyone with information to notify the authorities.

It’s believed that the incident took place in a shopping mall in Kota Kinabalu, Sabah.

Netizens also urged the authorities to take action against the man. While some netizens faulted the woman, others said that it was still wrong for the man to hit another person.

@PolisDirajaMsia pls get this guy!
Raising hands on a girl is already unforgivable and hitting her in that manner?? This fella deserves to be taught a good lesson behind bars. We don't need these kinds of menaces roaming around society freely.

According to Free Malaysia Today, Kota Kinabalu police have launched a probe into the video.

Kota Kinabalu police chief Zaidi Abdullah said no report has been received so far and they are still gathering information regarding the incident.

He also encouraged anyone with information to come forward to help with the investigation.