Among the reasons to sell the free tablets were to get more money or to upgrade their iPads. 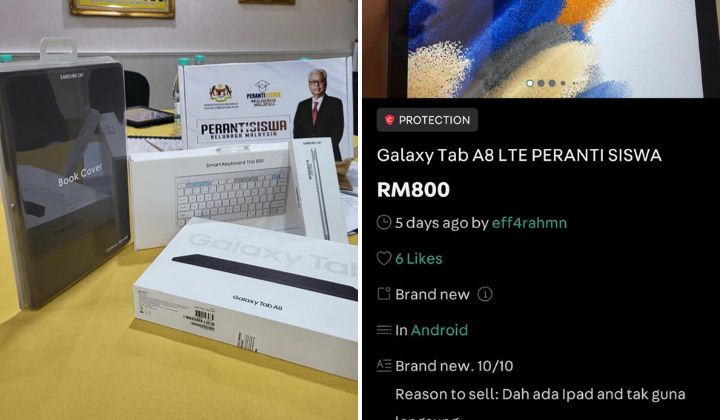 The concerns that some PerantiSiswa recipients will try selling their free tablets have possibly come true.

Muar MP Syed Saddiq along with a few netizens have allegedly spotted some ads where the free tablets, including its original keyboard, cover and stylus, were put up for sale online.

In one of the sales posts spotted by Syed Saddiq, a person claiming to be a PerantiSiswa recipient wanted to sell the free tablet because they already own an iPad.

Another alleged recipient wanted to sell the free tablet so they could upgrade their current iPad to be used for their studies while another person said they just needed money.

Syed Saddiq urged these recipients to return the tablets so that the gadgets could be given to those who really needed them.

He claimed that many students in the peninsular, Sabah and Sarawak who needed the free tablets didn’t manage to get theirs.

His statement was echoed by some who tried applying for the PerantiSiswa tablets but were allegedly rejected.

A student @arinachan, who claimed to be part of the B40 group, said she failed to get the PerantiSiswa tablet. She has tried working part-time to save up money to get a tablet herself but found it hard to scrounge up enough funds.

Other netizens believe those who were trying to sell their PerantiSiswa tablets should have at least passed them to students who needed them for free.

Some suspected that those selling the free tablets were not even from the B40 group, and wondered how they were approved as PerantiSiswa recipients.

Needless to say, those who badly needed the tablet for their studies but failed to get it were upset to see the items being sold online.

Checks on Carousell by The Rakyat Post found that the ads that went viral earlier could no longer be found.

PerantiSiswa is a programme to provide free tablets to poor students from B40 families to use in their studies.

After much back-and-forth discussions, Communications and Multimedia Minister Tan Sri Annuar Musa finally said in September that all eligible students will receive the latest Samsung Galaxy tablet, including the original Samsung Smart Keyboard Trio 500 and the S-Pen stylus.

READ MORE: Who Wants A Mystery Tablet? Phase 2 Of PerantiSiswa Starts Next Month

The PerantiSiswa programme is expected to benefit over 400,000 students. According to The Star, recipients are barred from selling the tablets under the terms and conditions.

Annuar said he was “deeply saddened” to hear some recipients were selling the tablets they received.

Students Selling PerantiSiswa Tablets Will Face Action, K-KOMM Can Block Tablets From Use