However, the Prisons Department clears the air, saying the interview in question is not a new recording. 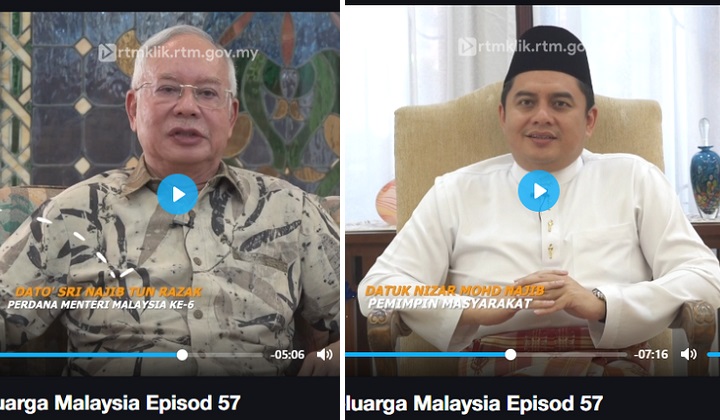 Incarcerated former premier Datuk Seri Najib Razak’s recent appearance on a programme by RTM, the Kembara Keluarga Malaysia travelogue series, caused a stir among Malaysians who continued to question the apparent special treatment being afforded to him.

Twitter user @The_Mamu questioned how Najib could be given airtime despite currently serving his jail sentence for misappropriating SRC International Sdn Bhd funds.

Another user @bawalsakti said that Malaysians need to be shown a picture of Najib in prison garb to prove that he is in fact serving his jail time.

Meanwhile, @Amshar_Aziz likened the situation to the Philippines during the Ferdinand Marcos administration, where the media only portrayed the positive side of the late dictator.

That is what happened in Philippines when they start to only portray positively about their national plunderer, Ferdinand Marcos.

However, @JdUnknownperson questioned why Pakatan Harapan’s (PH) sympathisers were so concerned with Najib’s appearance in the travelogue, stating that the episode that the incumbent Pekan MP appeared on was about Pahang and his constituency of Pekan.

“PH people still making allegations and assumptions about recorded TV shows about Pahang. Why are you guys terrified with 2 minutes of DSN (Najib) appearances,” wrote @JdUnknownperson.

Newsman Ooi Beng Cheang, who tweets from @luxentX, said that a quick Google search shows that the episode in question touched about Pekan and the heavy industries in the area.

I googled the episode, RTM has it online. Episode 57 was about Pekan, where the second half of the show featured Najib and his son. His son was quoted as ‘pemimpin rakyat’. They spoke about the highlights of Pekan and the heavy industries in it.https://t.co/PeXWL9J1ZI https://t.co/UJIJyTw3bN pic.twitter.com/2BKxPf2zSE

In responding to the matter, the Prisons Department in a statement today said that there has been no video recording made of Najib by any media agency within the premises of the Kajang Prison, where he is currently serving time.

“Our checks found that RTM recorded the video earlier in conjunction with Kembara Keluarga Malaysia episode 57, which was done before Najib was imprisoned,” the statement read.

It added that the episode, aired on RTM1 on October 24 was not about politics, but featured the history and background of Pekan, Pahang.

The department also warned the public against disseminating false information.

“Legal action can be taken against irresponsible individuals.”

The 69-year-old former prime minister is serving his 12-year jail sentence since August 23 after the Federal Court upheld his conviction and sentence for the misappropriation of RM42 million in SRC International funds.