After hitting his wife and scolding his children, he went to the roof and refused to budge. 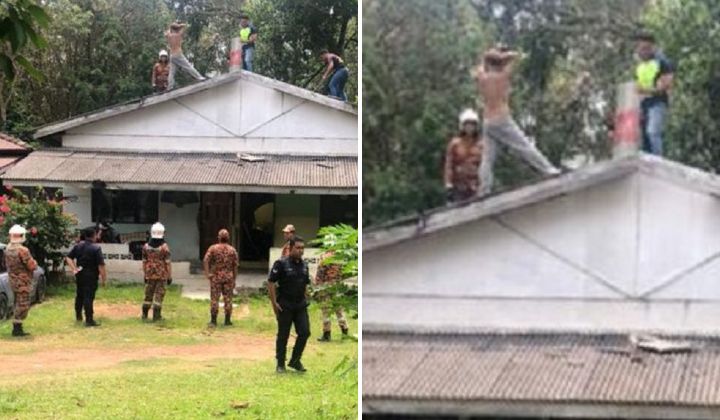 A man in Kampung Bukit Tempayan, Melaka, caused a ruckus on Monday, 17 October, and refused to leave the roof of his house when the police arrived around 11.30am.

According to Kosmo, the 37-year-old man allegedly hit his wife in the eye and scolded his three children, ages 10 to 13, before throwing a fit on the house roof.

When the police arrived, they saw the distressed man wielding a machete (parang) and a small meat knife.

After much coaxing from the police, the man threw down the weapons in defeat. The police then requested the firefighters to get to the roof to coax the man down.

One of the 11 firefighters on the scene managed to get onto the roof but a struggle broke out with the man and the incident broke some roof tiles.

After hours of coaxing, the team successfully brought him down from the roof around 1.40pm and sent him to Hospital Melaka for treatment.

The man sustained injuries near his eyebrows and body while struggling with the firefighter.

Kosmo reported that the man was a mental health patient and was receiving psychiatric treatment. It’s believed the incident occurred because he allegedly refused to take his medications.