The protest banners were targeted at a political party and the candidates at the upcoming 15th general election. 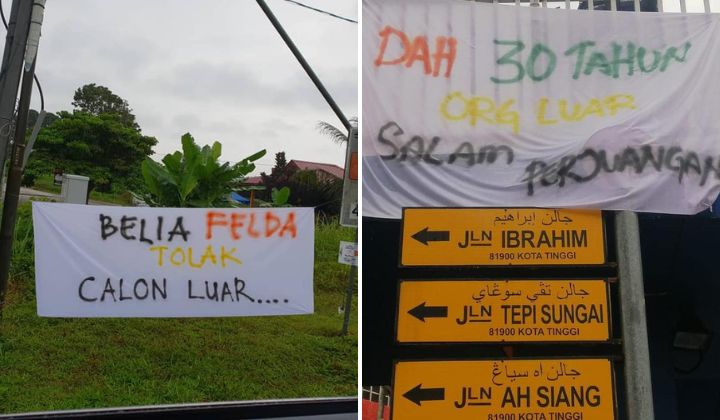 Johor police are on the hunt for individuals who have put up protest banners in six public locations in Kota Tinggi.

The protest banners, sprayed with different coloured paint, were against a political party and the upcoming candidates in the 15th General Election.

Since its discovery yesterday (10 October), the protest banners have been taken down.

Sinar Daily reported that Kota Tinggi police chief superintendent Hussin Zamora said stern action will be taken against the people involved in the case under Sections 500 and 509 of the Penal Code.

The police advised members of the public or any parties not to make provocations that could jeopardise public order in Kota Tinggi.

If parties want to put up a banner in the district, they must first obtain approval from the Kota Tinggi District Council.

Elections are to be held in 60 days

Since the Parliament was dissolved on 10 October, the upcoming general elections must be held within the next 60 days.

Reports indicate that the 15th general election is likely to take place before 10 November in a bid to avoid the monsoon season.

The Election Commission (EC) is expected to convene this week to decide the dates for candidate nomination and polling day.

READ MORE: First Time Voting? Here’s Everything To Get You Started

Judging by the previous elections, the EC allows parties two weeks of campaigning. During this time, tempers can get heated but it’s important to handle differences in a mature manner and have your say when it’s time to vote.