The man took it upon himself to help drain water from the flooded highway while armed with a shovel. 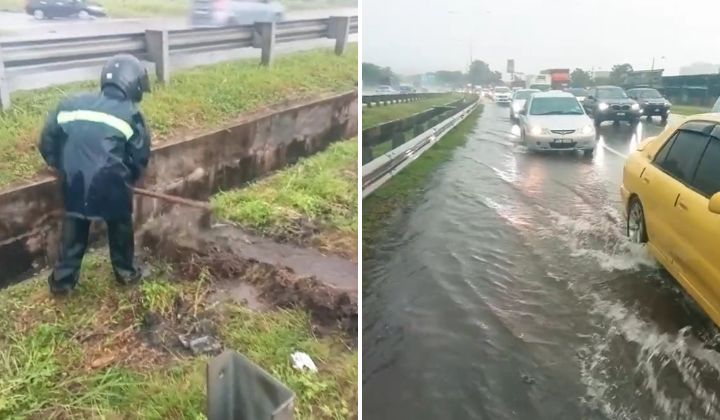 In preparation for the year-end floods, firefighters and the police have been sent to monitor flood-prone areas.

Although there are contingency plans in place, both the firefighters and the police are only a few in number and they can’t cover all areas.

This is when the task falls to the everyday man just like the man featured in a viral TikTok video posted by @juharmariankha.

The video showed a man digging a path on the grass patch so that the water gathering on the busy road in Pasir Gudang Highway could flow into the roadside drain.

While he was making the path deeper with a shovel, the water on the road quickly gushed along the dug path and emptied into the drain.

His simple plan helped to prevent the road from fully flooding and inadvertently helped many motorists on the road that day.

He was hailed as a hero and was praised for his selfless act to help many people that day.

Many netizens thanked him and pointed out that it wasn’t something most people were willing to do.

However, a few netizens also wondered why the Public Works Department (JKR) wasn’t there to manage the potential flood situation instead.

They believe that JKR should be monitoring roads that are flood prone as well.

Bracing for the year-end flood

MetMalaysia’s current prediction showed that the thunderstorms and intermittent heavy rains in parts of the country could lead to flash floods.

Nevertheless, Malaysia’s disaster agencies have readied preparations to brace for the year-end flood.

The Department of Irrigation and Drainage (JPS) has prepared equipment such as flood warning sirens and mobile pumps.

According to Malay Mail, the Selangor government has also proposed measures to send advance equipment to temporary evacuation centres (PPS) in flood-prone areas.

[Watch] Man Lying On The Road Thought To Be High On Glue, Turned Out It Was Seizures

The People’s Champion Is Back: East Coast Flood Victims Look To Abang Viva For Help