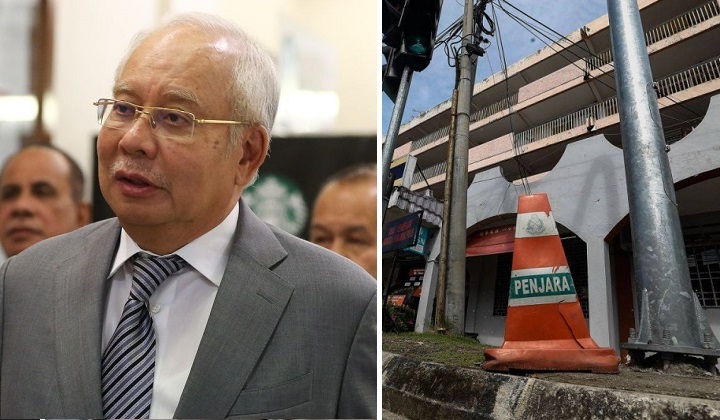 Jailed former premier Datuk Seri Najib Razak has filed a judicial review to challenge the Prisons Department’s decision not to allow him to attend the Dewan Rakyat sitting.

According to Bernama, the application was filed at the High Court yesterday through Messrs Shafee & Co.

Three parties have been named as the respondents; the government, Home Affairs Ministry and the Prison Commissioner General.

In his application, Najib – who retains his Pekan MP status despite currently serving a 12-year prison sentence – seeks to turn the decision of the Prison Commissioner General in barring him access to his aides for the purposes of parliamentary, legislative and constituent work.

He also challenged the decision not to allow him to attend the Dewan Rakyat sitting.

Apart from that, Najib is also seeking a declaration that he is entitled to have reasonable access to his aides regarding parliamentary, legislative and constituent work, as well as a mandamus order for the prisons department to take all steps necessary to allow him the access to his aides for those purposes.

Najib said the decision not to allow him to attend the Dewan Rakyat sitting was conveyed to him at the Kajang Prison Office on 28 September.

He appealed against the decision to the Home Affairs Ministry on 30 September.

Najib said he filed the legal action due to the lack of response from the Ministry regarding his appeal.

The former prime minister said that, as the Pekan MP, he has a constitutional obligation to discharge his duties in accordance with Article 59 of the Federal Constitution.

“A denial of that right by the respondents in refusing me the ability to administer my constituency is in effect a denial of the wellbeing of the constituency of Pekan,” Najib stated in his affidavit.

The judicial review has been fixed for case management before High Court Judge Datuk Ahmad Kamal Md Shahid on 12 October.

Najib, the first former prime minister to serve time behind bars, was sent to prison for 12 years after he was found guilty of misappropriating RM42 million belonging to SRC International Sdn Bhd, a former subsidiary of 1Malaysia Development Berhad (1MDB). He was also fined RM210 million.

Despite his incarceration, the former UMNO president retains his Pekan MP status after applying for a royal pardon and a judicial review of the Federal Court’s decision to reaffirm his prison sentence and fine.