The driver shockingly came to a complete stop in the fast lane of the highway after brake-checking the car behind him several times. 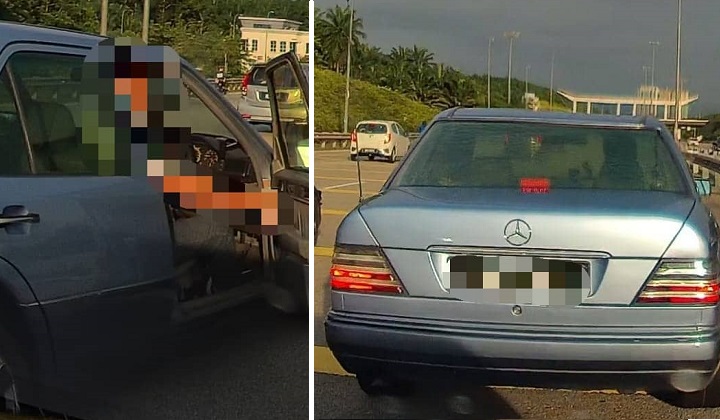 A dashcam video captured an incident showing a driver of a Mercedes Benz brake-checked a car behind him – after he was honked for using the SmartTag lane on the highway – but using the Touch n’ Go card instead.

It all started when the Mercedes Benz driver, was found to use the Touch n’ Go card while opting for the SmartTag lane.

He was seen putting the card several times towards the card reader in the lane, prompting the driver behind, who was also the one with the dashcam recorder on his car, to honk at him.

After getting through the lane, the car was seen moving onto the middle lane of the highway, before he was overtaken by the car behind.

The driver then was seen overtaking the same car, performing brake checks several times, and refusing to give way to the driver that had honked at him earlier.

Upon exiting the highway and nearing another toll plaza, the Mercedes Benz shockingly stopped in the fast lane for several seconds, causing the driver behind to overtake him for a second time.

Still feeling dissatisfied, the driver then cut across in front of the car when the two vehicles were close to the toll plaza and open up his door, but remains seated in his car seat while staring at the driver behind.

The driver however didn’t respond to the other driver’s question about why he had tried to ramp into his car earlier.

Based on the footage, the incident took place last Tuesday on North Plus Expressway (PLUS) nearby Semenyih.

The video, uploaded to the Dashcam Owner Malaysia Facebook page, had been shared more than 2,500 times by Facebook users and also posted on other social media platforms.

While many agree that the act of abusing the SmartTag lane was selfish and urge the driver to be reported to the police, some suggest that perhaps his SmartTag device is not working which prompts him to use his Touch n’ Go card.