The father of two washed and cleaned the pink trolley toy before letting his children play with it. 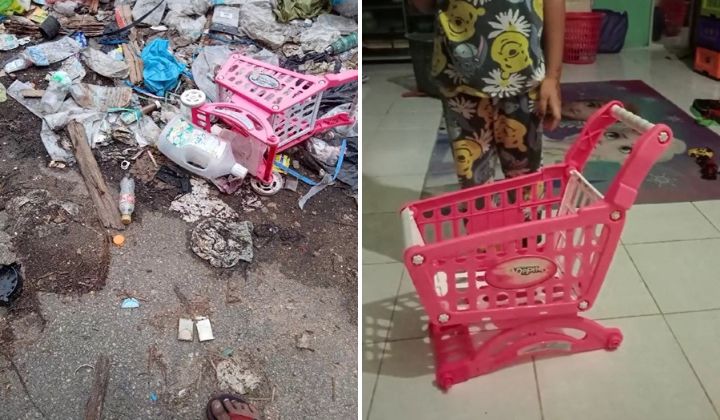 A father’s love for his children knows no bounds and this statement is proven when a father salvaged a toy from a rubbish dump for his daughter to play with.

Based on a TikTok video shared by @abieaisymikhail, the father came across a pink trolley toy at a rubbish dump near his home when he was on the way to work.

Despite only having two visible wheels intact, the trolley is still relatively in good condition to play with.

According to Harian Metro, Mohd Zakiman Irwan Othman, 35, didn’t immediately retrieve it. He returned to the rubbish dump later in the day and saw that the trolley was still there.

He took a picture of the trolley to show his wife who gave the approval to bring it home for their children.

He brought it home and made sure to wash it clean before letting his children play with it. His two children posed happily beside their new toy from their dad.

In the video caption, the father of two said he isn’t embarrassed about what he did as long as his children are happy. His children knew where the toy originated from and paid no mind.

Mohd Zakiman Irwan said he usually buys his children toys from the RM2 shop because that’s what he could afford as a factory worker.

He told Harian Metro that he wouldn’t accept money from others because there are others who needed it more than him. However, he said it’s not an issue if it’s gifts for his children.

Netizens were touched by his love for his children and told him to ignore the critics who looked down on him.

They assured him that his children think of him as their hero for bringing back toy gifts for them.

A few of them also shared that they used to collect toys from the rubbish dump because they knew their parents couldn’t afford to get them toys.

They said the toys are safe for children to play with as long as the toys can be cleaned and washed once they are brought home.