A TikTok user recently uploaded a video on the platform advising the public to stay vigilant, claiming that there have been cases of people being kidnapped and their organs being sold to hospitals in Johor. 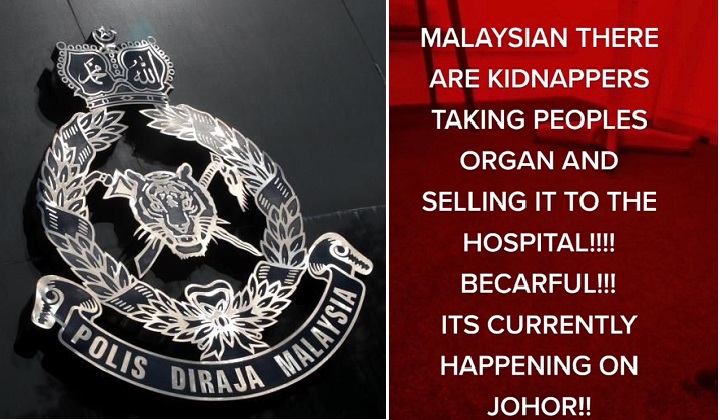 Johor Police chief Comm Datuk Kamarul Zaman Mamat has shut down rumours of people being kidnapped for organ harvesting in the state as made in a now-viral TikTok video.

“There have been no police reports regarding such cases as claimed by the account holder,” Kamarul Zaman was quoted by Harian Metro.

He added that the police viewed the posting as an attempt to instigate fear among the public.

According to Kamarul Zaman, it is illegal for any parties to spread fabricated speculation like this and the perpetrator could face action under Section 233 of the Communications and Multimedia Act 1998, which is punishable with a maximum fine of RM50,000, a one-year jail term or both upon conviction.

The Johor police chief was commenting on a TikTok uploaded by the application user, @aestheticharu, which advised the public to be careful, claiming that there are cases of kidnappers abducting people before harvesting their organs and selling them to hospitals in the state.

The video, uploaded two days ago, is yet to be taken down by the TikTok user.

Kamarul Zaman urged the public not to be gullible and believe such fake information made by unverified sources.

READ MORE: [Watch] Abducted Kelantanese Woman Believed To Have Been Taken To Thailand