The superbike was driving recklessly and performed an emergency brake. 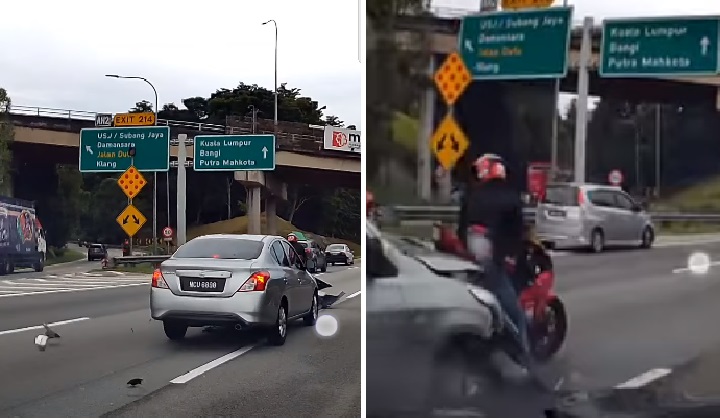 A dashcam video captured an accident showing a superbike rider narrowly cheating death after his decision to perform an emergency brake on the fast lane of the North-South Expressway (PLUS) causing a Nissan Almera to ram into his machine.

The crash caused the Almera to ‘jump’ a few times before coming to stop after crashing into the rear of the superbike.

Despite being crashed from behind, the rider was lucky that he remain mounted to his seat.

Based on the video, uploaded on Facebook by John Kiew, it is believed that the motorcyclist was a part of a superbike convoy.

Prior to the crash, the superbike rider was behind the Almera as seen in the video. Upon overtaking the car, it appeared that he was about to miss an exit as several other convoy members had exited the expressway on the left.

This appeared to be the reason he slowed down while in the fast lane, resulting in the crash.

While netizens said that he is lucky not to lose his life during the accident, some commented that those who partake in a convoy should be alert of the planned route in order not to trouble the other road users.