The football fans were allegedly trampled on and suffocated to death in the chaos. 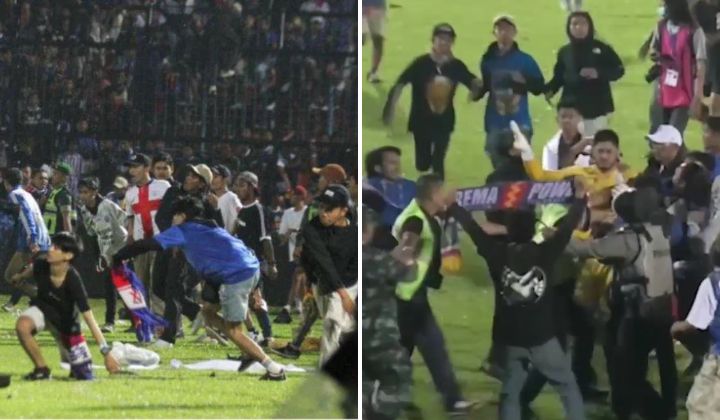 Around 120 football fans in Indonesia died while 180 were injured after a stampede following a football match in East Java between Arema FC and Persebaya Surabaya on 1 October.

Based on reports, football fans gathered at the Kanjuruhan Stadium in Malang to watch both teams take on each other in Liga 1.

The home team, Arema FC, lost the match 2-3, and the fans of the losing team stormed the pitch and caused chaos.

According to Sportskeeda, police tried to control the crowd using tear gas which led fans to scramble for one exit. Some scaled the fences or continued running onto the pitch.

In a report by New York Times, East Java police chief Inspector General Nico Afinta defended the use of tear gas because there was anarchy.

They were about to attack the officers and had damaged the cars.

Mahmud MD, Indonesia’s coordinating minister for political, legal and security affairs, said the victims died due to the stampede. They were allegedly trampled on and suffocated to death.

There were no victims of beatings or mistreatment of the supporters.

Victims were evacuated by the medical team and sent to several hospitals for medical attention.

Two matches – Persib vs Persija Jakarta and PSIS Semarang vs Bhayangkara – were scheduled to be played on Sunday.

We are concerned and deeply regret this incident. We share our condolences and hopefully this will be a valuable lesson for all of us.

President Joko Widodo aka Jokowi has asked the national police to investigate what happened thoroughly.

He had also ordered the minister of youth and sports, the national police chief and the chairman of Indonesia’s football association to evaluate security at football matches.

I regret that this tragedy occurred. And I hope this is the last football tragedy in the country.

The New York Times wrote that football-related violence has long been a problem in Indonesia due to fierce rivalries and it explains why there are often riot police standing by at matches.

Since the 1990s, many fans have been killed in football-related violence.