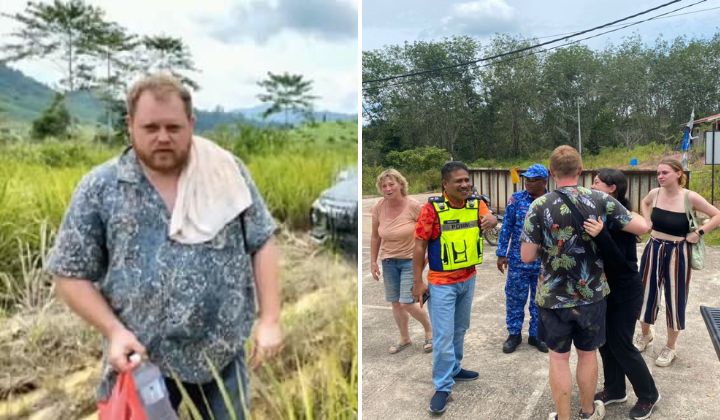 A British food blogger Rhys William James Woodfield and four of his family members were reported missing in Pahang on Tuesday, 27 September 2022.

The blogger of Mat Salleh Cari Makan was hiking with his family in Kuala Tahan, Jerantut in the afternoon and was supposed to head back to Kuala Lumpur on the day they went missing.

Rhys William’s wife, Haigwood Woodfield, 30, lodged a police report at Jerantut police station at 1.30am when the group didn’t return.

The group actually managed to exit the forest vicinity on 27 September around 11.30am but couldn’t be reached by Rhys William’s wife.

Upon receiving the report, the police immediately carried out a search with people from Eco Rimba Taman Negara Kuala Tahan from Kuala Tahan to Kampung Pagi around 2.30am.

The search-and-rescue operation (SAR) continued on 28 September at 8am and a SAR operation center was opened at Balai Raya in Kampung Pagi at 10am, where the search party was joined by several agencies.

Fortunately, the group was found safe at Kawasan Sungai Relok, Kampung Pagi, in Ulu Tembeling around 1.10pm on Wednesday, 28 September. They were sent to Klinik Kuala Tahan for a medical examination.

Rhys William thanked everyone for their kind wishes and shared that everyone is doing well on his official Facebook page.

He also thanked the police and the rest of the search party and ended the post with an apology for the inconvenience.

Jerantut police chief Superintendent Mazlan Hassan advised visitors to use the services of a tourist guide so they won’t get lost in the forest.