The former Pandan MP said that weather reports are pointing toward a more severe flood this year and the funds and manpower are better allocated for flood relief plan than holding a general election. 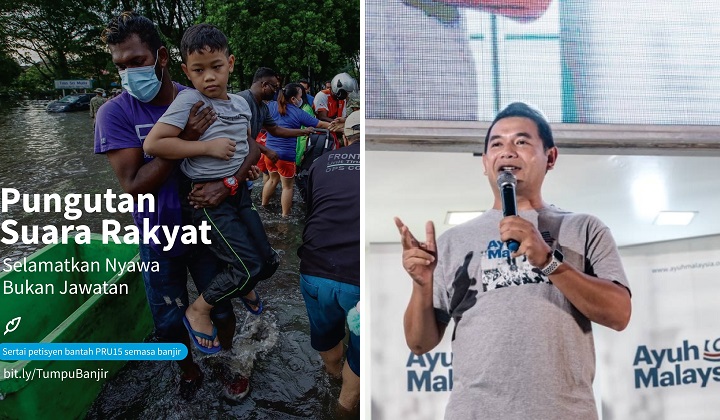 PKR Deputy President Rafizi Ramli has initiated a petition to oppose the 15th General Election (GE15) to be held at year’s end which coincides with the monsoon season.

Rafizi said that holding GE15 during the flood seasons would cost the country more than RM1 billion to manage the election.

He said that these funds are better used for flood relief plans while the thousands of civil servants that will be on duty during the election would be better utilised as volunteers to help flood victims.

The former Pandan MP said that by signing the petition, the rakyat would send a clear signal to politicians to focus on flood relief plans rather than chasing political positions through elections.

“Help me to channel your voice to these politicians. Sign this petition and spread it to as many people as possible through all channels.

“I am just one citizen. With the help of hundreds of thousands of other people’s voices, our collective voice will be heard,” Rafizi wrote on his Facebook.

He also shared the link to the petition which has garnered over 6,500 signatures at the time of writing.

Rafizi claimed that Prime Minister Datuk Seri Ismail Sabri Yaakob is under tremendous pressure from UMNO to hold the GE15 as soon as possible.

“If the Parliament is dissolved within a month from now, GE15 will be held during the flood season.”

“The monsoon season has not yet arrived, flash floods continue to occur in places that have not previously experienced severe flood disasters.”

UMNO President Datuk Seri Ahmad Zahid Hamidi – who is among the proponent of GE15 to be held before the year’s end – had said that the flood and inflation narrative were just a ploy from the Opposition to delay the general election as the pact is facing a deficit of Malay support, which has been described to be at an all-time low for Pakatan Harapan (PH).