The incident took place while the standard three schoolgirl was waiting for her school session to starts at SK Pengkalan, Taman Pinji Mewah in Ipoh, Perak last Friday. 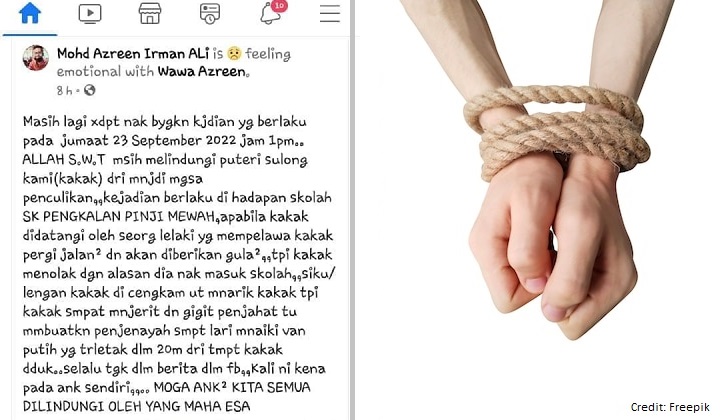 Most of us would still remember our parents’ advice not to entertain approaching strangers who offer candy or a ride when we are still kids.

This appears to be a solid piece of advice as the tactic were still used today to allure unsuspecting children by child kidnappers.

Recently, a Facebook user by the name of ‘Mohd Azreen Irman Ali’ shared that her daughter had almost become a kidnap victim in front of her school in broad daylight.

The incident was detailed on the Jabatan Netizen Negara Facebook page which stated that the kidnapping attempt had occurred last Friday (23 September) in front of SK Pengkalan, Taman Pinji Mewah in Ipoh, Perak.

It all began when the 9-year-old schoolgirl was waiting with her friend to enter her school at about 1.05pm last Friday.

As her schooling session started at 2pm, she and her peers had to wait outside the school gate until the morning school session ended.

While waiting outside the school gate, suddenly a white van with dark tinted glasses came about and out came a male Malay who approached the girl and her friend, saying “come follow me for a ride, I’ll give you candy”.

When the girl refuses the offer, the suspect then suddenly grabs her right arm. The girl then began to scream and went on to bite the suspect’s hand which caused him to flee the scene.

The scream alerted the school security guard who rushed out from the compound, but the suspect and the van had already gone.

The girl’s parents were told of the incident by the girl herself when she got back from school.

A police report had been made and the school was also asked to allow schoolchildren in the evening session to wait inside the school compound for their session to start in the future to prevent these incidents from happening again.

Regarding the van used during the kidnap attempt, it was described as a long white van without any logo on its body and CCTV footage confirmed that the plate number is VJ 5656.