Anwar stressed that he had never announced that he want to contest in Ampang in GE15 but said that as leader of a multi-racial party, he would have no problem in contesting in any seats in the next general election. 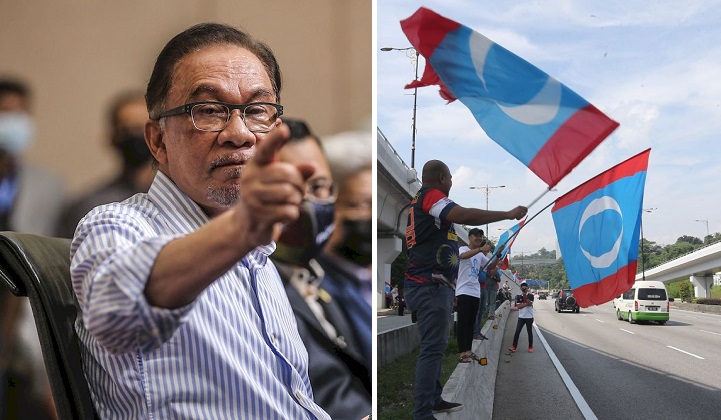 Opposition leader Datuk Seri Anwar Ibrahim had quashed rumours that he intends to stand in the Ampang parliamentary seats in the 15th general election (GE15) due to being afraid of contesting in a Malay-majority seat.

According to The Star, Anwar said that he had never announced his intention to contest in Ampang as alleged by Batu Pahat MP Datuk Mohd Rashid Hasnon, who was previously with PKR before joining Parti Pribumi Bersatu Malaysia (Bersatu).

Anwar said that Rashid had purportedly claimed that he is switching to Ampang to help the incumbent MP, Datuk Zuraida Kamaruddin, another former PKR leader.

“This is not the way to help Zuraida and I have never said that I want to contest in Ampang,” Anwar told a press conference after attending a Wanita PKR gathering in Nibong Tebal, Penang yesterday.

The PKR president added that as a leader of a multi-racial party, there would be no issue for him to contest any seats in the country as PKR never promoted itself as a Malay and Islami-centric party like Bersatu or UMNO.

Anwar was responding to Rashid’s remarks that he is ditching Port Dickson because he was afraid of rejection from the Malay voters in the constituency.

Rashid, who is also a Perikatan Nasional (PN) exco said that Pakatan Harapan (PH) realised that the Malay voters’ support for the coalition was in the wane following their ill-fated 22-month reign following GE14 and could now only rely on the Chinese support in the next general election.

Speculation is rife that Anwar may not defend his Port Dickson seat in GE15. He had previously said that he will be open to contest in several seats, including Tambun and Permatang Pauh.

READ MORE: Tambun Up Next For Anwar? PKR President Doesn’t Rule Out Possibility Of Contesting In Perak For Next GE