He was on his way home at Felda Lok Heng Selatan in Kota Tinggi when he lost control of the vehicle. 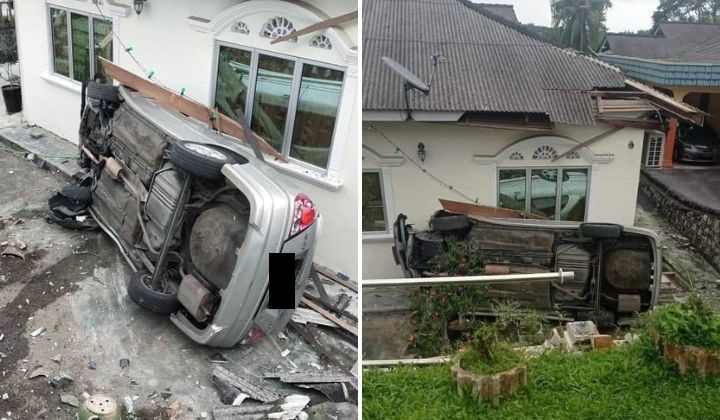 A car lost control and fell into the compound of a house at a Federal Land Development Authority (Felda) settlement yesterday (21 September).

The 22-year-old driver was making his way home along Jalan Aman in Felda Lok Heng Selatan in Kota Tinggi, Johor, when he lost control of his Nissan Sentra around 7.30pm.

He hit the roof of another house before landing on its side in the house compound. According to The Star, the driver sustained minor injuries to the forehead.

Kota Tinggi OCPD Superintendent Hussin Zamora said the accident happened due to the driver’s carelessness, which led to his failure to control his car.

The weather was fine and the road wasn’t busy when the accident took place.

The case is being investigated under Rule 10 of the Road Traffic Rules 1959 (LN 166/59) for failure to exercise due control over the movements of the vehicle.

Netizens reminded everyone to be careful while driving in Felda settlements because the roads could be narrow on high grounds.

A netizen shared that a similar accident involved a lorry. The lorry transporting oil palm also lost control and plunged into a house compound.

One of them added that the driver was lucky because the car didn’t catch on fire and wished everyone to stay safe.