The expressway operator’s spokesperson said that the signage will either be modified or replace it with a new one. 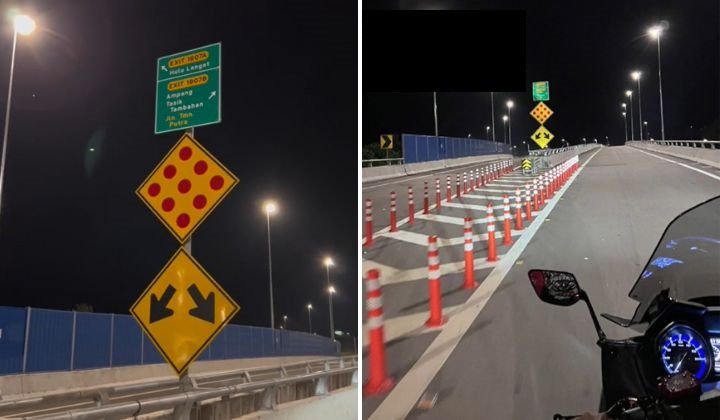 The tiny exit signboard near the Hulu Langat and Ampang intersection on the newly opened Sungai Besi-Ulu Kelang Elevated Expressway (SUKE) had been removed following a viral video of a motorcyclist complaining about the punitive size of the signage.

According to Malay Mail, the signage, which was described as only as big as an A3 paper, has been taken down by the expressway operator.

“Our corporate communications team has taken note of the incident. We have already sent a team to inspect the area.

“From the latest info we’ve gathered, our patrol team has removed the signboard.

“Most probably it (the signboard) will be modified or replaced with a new one,” the company’s spokesperson was quoted as saying by the news portal.

SUKE is a three-lane, dual-carriageway which runs from Sri Petaling to Ulu Kelang and also features 14 interchanges, reaching out to over 60 residential areas and is connected to major highways and roads in KL.

On Monday, a Tiktok user @bob_yp, posted a video showing how small the signboard that was erected at the intersection of Hulu Langat and Ampang on SUKE.

The video had since garnered over 800k views from netizens who agreed that the size of the signage was too small.

The first phase of the expressway – a 16.6km long stretch from the Cheras-Kajang Interchange to Bukit Antarabangsa, was opened to the public last Friday.

The first accident on the expressway was recorded on Sunday – as a motorcyclist crashed behind a car which was parked in the emergency lane as the driver wanted to enjoy the view.

READ MORE: First Crash On New SUKE Highway Because Someone Stopped To Admire The View