The most popular prisoner at the moment is still active on Facebook despite living behind bars since 23 August for embezzling RM42 millions of SRC International Sdn Bhd funds. 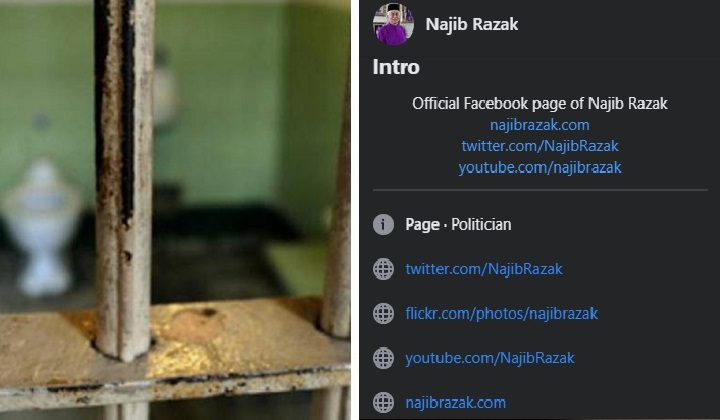 The DAP supremo said that it has been two days since an anonymous Twitter user made the claim that the nation’s most popular inmate at the moment is being accorded privileges while serving his 12-year jail sentence.

These include a renovation for his cell in the Kajang Prison complex as well as plans to allow him to receive treatment at the Cheras Rehabilitation Hospital (CRH) to allow more access to visitors as well as enjoy VVIP facilities at the hospital.

“The “Merpati” social media post had been in circulation for the last two days and it is most unlikely that the authorities are unaware of it.

“The authorities in the Home Ministry and the Prison Department should realise that 24 hours is a very long time in the era of social media, let alone 48 hours.

“In the circumstances, the question becomes even more pertinent as to why the Home Ministry and the Prisons Department are keeping a “thunderous silence”,” Lim said in a statement today.

Lim’s son, the chairman of DAP Lim Guan Eng had also voiced out that the government should firmly answer the allegation that is going about on social media with regard to the special treatment afforded to Najib.

“We don’t know whether the allegation is true or not but the authorities must answer it. There have always been new postings on his Facebook and we know that the account’s admin must have crafted it,” Utusan Malaysia quoted the junior Lim.

Agreeing with the Bagan MP, Pejuang deputy president Datuk Marzuki Yahya said that Najib should receive the same treatment as other prisoners in the country while adding that he believed that Najib’s Facebook is being run by his social media team.

The allegation that Najib had been receiving special treatment in prison was made on social media on Monday. The long Twitter thread had been retweeted over 11,000 times at the time of writing.

From an undisclosed source on DS Najib.

Merpati is a codename for Najib:

Najib, who retains his Pekan MP status after applying for a royal pardon and a judicial review of the Federal Court decision to reaffirm his prison sentence, is currently serving his 12-year jail time at Kajang Prison beginning on 23 August.

However, despite his incarceration, his Facebook remains active until today.

In a related matter, it was confirmed that the former UMNO president is currently being treated at CRH after being referred to by Kuala Lumpur Hospital (HKL) last Monday.

READ MORE: Najib Warded At Cheras Rehab Hospital, To Return To Kajang Prison After Getting Clearance From Specialist