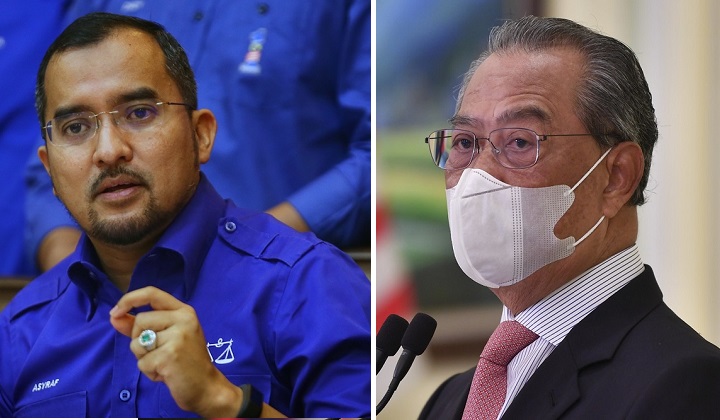 Perikatan Nasional (PN) chairman Tan Sri Muhyiddin Yassin has been urged to bring the coalition out of the government if he insists that the economy is not managed properly by the current administration.

According to UMNO Youth chief Datuk Asyraf Wajdi Dusuki, Muhyiddin, who is also the Parti Pribumi Bersatu Malaysia (Bersatu) president shouldn’t continue to just “bark” and make threats but instead should pull the support from Prime Minister Datuk Seri Ismail Sabri Yaakob if he thinks that there’s a need for a snap poll to be held immediately due to the weakening of the country’s economy.

“Be a man and straightaway call for all your followers in the government to withdraw support from the prime minister,” Asyraf wrote on his Facebook.

He was responding to Muhyiddin’s comment that Prime Minister Ismail Sabri should dissolve the Parliament to pave the way for an early general election if the government continues failing to manage the economy.

Muhyiddin pointed to the weakening of the Ringgit, the labour shortage to support the economy, and the food insecurity as evidence that Ismail’s premiership had failed to manage the nation’s economy.

Asyraf retaliated by saying that the current economic situation was far better compared to Muhyiddin’s tenure as the prime minister.

“The economic situation today is much better than when he did the longest half-baked ‘Lock-Down’ and suspended Parliament arbitrarily for several months.

“So who actually failed to manage the economy,” asked Asyraf.

The UMNO youth chief also pointed out that it was Muhyiddin’s own men that were tasked with managing the country’s economy.

“Who is the International Trade and Industry Minister? Who is the minister in charge of the Economy? And who is the chairman of the National Recovery Council? Aren’t they all from the ‘bunga’ party (referring to Bersatu’s logo)?”

Asyraf added even Ismail’s administration too inherited the finance minister that Muhyiddin appointed during his tenure as the country’s prime minister.

He asked whether Muhyiddin also thinks that Finance Minister Tengku Datuk Seri Zafrul Tengku Abdul Aziz had failed to help the government manage the economy after he joins UMNO.

READ MORE: PM: If The Government Failed, It Means Muhyiddin Has Failed Too