Segambut MP Hannah Yeoh questioned how can Rina’s ministry approved the script for the promotional video about the ministry’s programme with actor Rosyam Nor as it contains disparaging remarks against women. 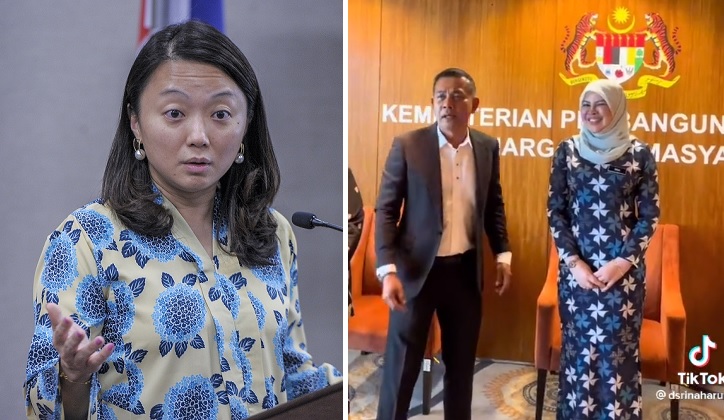 According to Free Malaysia Today, Yeoh said that this was not the first time Rina had embarrassed the ministry by resorting to cheap publicity.

“Even worse, Rina and officers of Yayasan Kebajikan Negara just stood by and smiled as insults were levelled at women,” Yeoh was quoted as saying.

The Segambut MP was referring to a TikTok video featuring actor Datuk Rosyam Nor to promote the ministry’s Women Rise Entrepreneurship Programme at the World Trade Centre Kuala Lumpur this morning.

Inside the 40-second video, Rosyam uttered disparaging remarks against the woman community, among others, saying that women are late in all aspects.

Rosyam also said that he would beat some sense into women’s heads that attended today’s programme so that they would wake up.

Yeoh said that the script for the programme’s promotional video shouldn’t have been approved by a ministry that represents women.

“If Prime Minister Datuk Seri Ismail Sabri Yaakob is serious about Keluarga Malaysia, he should fire such a minister who belittles women.”

Yeoh said that there’s a lot more for Rina and her ministry to do rather than become an event organiser.

“The ministry has been a joke for the past three years. It saddens me to see the personnel, agencies under the ministry as well as its target groups used like this.”

The promotional video, which had made its rounds over social media, was also criticised by netizens for the insensitive remarks directed at women.

@RinaMohdHarun You constantly embarrass women and demean our cause. You have done absolutely nothing for us since you took over the position you clearly do not deserve. Tapi kita tahu, kulit awak tebal, awak tak kisah, janji publisiti ada.

Why is she smiling like a little girl at the back in such a way. I’m having secondhand embarrassment watching this.