The group of mat rempits was spotted gathering and revving their bikes near the toll booth yesterday night. 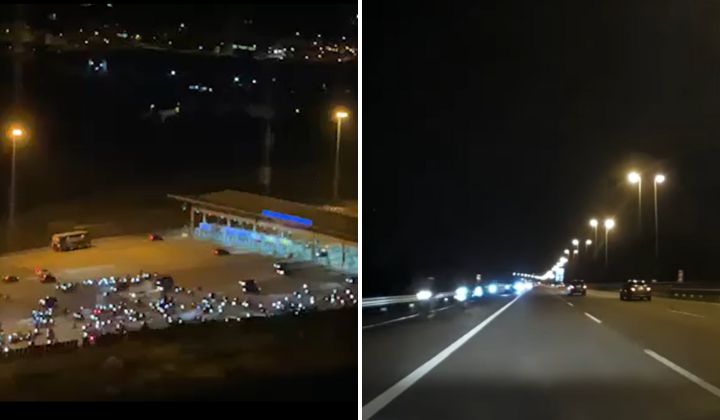 A large group of Mat Rempits was spotted gathering along MEX highway yesterday night (7 September 2022) to the disdain of other motorists on the road.

The videos posted by the Facebook page We Are Malaysians showed a massive group of motorcyclists waiting and revving their rides outside a toll booth on the highway.

People staying nearby the highway complained about the noise and sound pollution.

Another video on the Facebook page Inforoadblock showed the mat rempits riding against traffic on the same highway.

In one of the videos, a police car could be seen passing by the group too but seemingly took no action against the gathering.

Netizens said there was no way the authorities didn’t catch wind about this large gathering of mat rempits.

Some even questioned why the people working at the toll booth didn’t inform the police or the Road Transport Department (JPJ).

Other than the noise pollution, there were also complaints about the group of motorcyclists endangering other road users on the road.

The efforts to discourage the dangerous behaviour so far

Mat rempits have long been a nuisance on the road. Their irresponsible and risky actions have caused plenty of deaths but they continue to be road menaces.

While there are a few programmes now and then (or in planning) to help channel their interests into something much safer such as professional racing, illegal gatherings and races still continue.

Back in 2019, the authorities submitted proposals to the Transport Ministry to enforce a new B3 motorcycle license category.

The proposed B3 motorcycle license would allow future youths to ride electric bikes or low-powered, small-capacity engine motorcycles (70cc and below) in an attempt to slow them down.