Even with the cover-up paint job, a faint outline of the words could still be seen as if the haze truly obscured everyone’s vision. 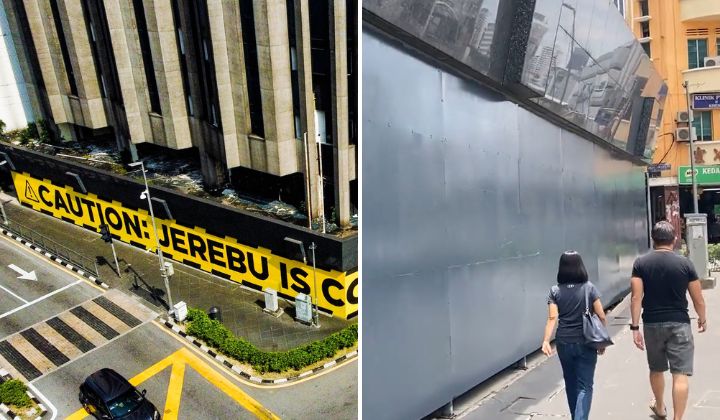 If the city sky has looked or smelled funny to you for the past few months, you’re not imagining things. The haze is indeed here and it felt like it has never left.

On 4 September, satirical artist Fahmi Reza painted a cautionary mural, “Caution: Jerebu (haze) Is Coming Back” on the side of the Wisma Megah building in Jalan Tun Tan Cheng Lock.

According to Malay Mail, the mural is directed at Malaysian-owned companies involved with open burning which was behind the regional haze in previous years.

The haze will make a comeback if we don’t stop these Malaysian-owned companies who are responsible for the forest fires in Indonesia.

However, the mural was vandalised in less than 24 hours by allegedly irresponsible individuals.

Someone painted over the leg of the ‘R’ on the ‘Jerebu’ word with yellow spray paint.

Fahmi managed to repair the mural back to its original state but it didn’t last long.

After only three days, the mural was completely painted over. Despite this, the faint outline of the mural could still be seen from an angle so all isn’t lost!

Netizens said the cover-up paint job ended up being kind of symbolic because the letters could still be seen. It was as if the haze truly covered up the words against the wall.

Others joked that Fahmi was given a blank canvas for his next great idea. A netizen also suggested Fahmi use glow-in-the-dark spray paint next time.

Since the public mural was covered up quickly, a netizen suggested a novel idea to paint over potholes so that the authorities would fix them as fast as they could.

However, some voiced their worries that a mural was erased, citing it as a cowardly and petty act.

A blank grey canvas for your next idea ! pic.twitter.com/j31zefdoTI

its terrible and worrying to see a mural reminding of capitalistic repercussions being erased… its no surprise that people are money-driven but to take down a reminder of the annual haze is just, petty, cowardly and fascist