The rumour alleged that Najib was given one of the houses meant for senior prison guards within the prison grounds. 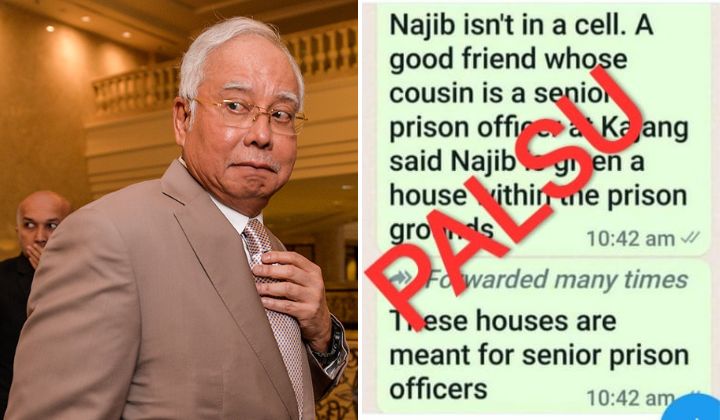 The Malaysian Prison Department has shot down rumours that the former prime minister Datuk Seri Najib Razak was placed in a house within the prison grounds.

The rumour, in a form of a Whatsapp message, claimed that Najib isn’t staying in a prison cell but was given a house meant for senior prison officers in Kajang prison.

The rumour sent in Whatsapp

This rumour comes right after the first rumour that claimed the prison quarters for VIP inmates had better facilities such as having a better mattress and being able to watch television.

According to New Straits Times, it was also previously alleged that Najib’s name was not included in the Prisons Department’s system.

On 23 August, he was sentenced to 12 years imprisonment and faces an RM210 million fine for misappropriating RM42 million SRC International funds, a former subsidiary of 1Malaysia Development Berhad.

Najib didn’t stay in prison for long because he was reportedly hospitalised and treated at Hospital Kuala Lumpur on 4 September.

An unnamed aide shared that Najib was in stable condition and underwent some medical tests.