The kidnapper threatened to throw the cat into a river if the ransom was not paid. 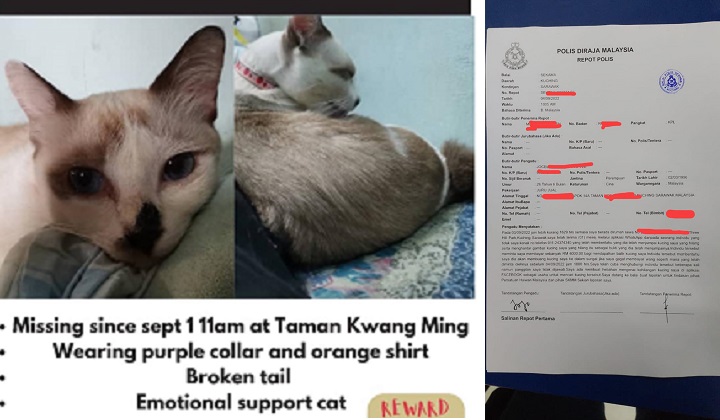 A cat kidnapper in Kuching, Sarawak had threatened to throw the cat into a river if the owner refuse to fork out RM6,000 in ransom.

The bizarre incident was highlighted by Malaysia Animal Association, with its president Arie Dwi Andika saying that this was the first kidnapping case involving a cat and thousands of Ringgit in ransom inside the country.

It all started when the owner of a cat named ‘Snow’ realised that her pet cat was missing from her home in Taman Kwan Ming, in Kuching, Sarawak on 1 September.

On the same day, she put up a poster on Facebook hoping that those who spotted her emotional support pet can help return it safely to her home.

However, two days later, an unknown individual sent her a WhatsApp message claiming that Snow had been kidnapped.

The individual also sent the cat’s owner photos and videos of the cat and asked for a ransom of RM6,000 to be paid before 6pm on 3 September.

The ransom money was asked to be transferred to a Hong Leong Bank Berhad bank account belonging to an individual named ‘Chen Chew Swee’.

The cat owner told the kidnapper that she only have RM200 to offer but the kidnapper refused to budge from the total ransom that was asked.

A police report was subsequently lodged by the cat’s owner on 4 September but the investigating officer allegedly discourage her from prolonging the matter, citing that it will take three months for the bank to provide information about the account holder.

The police officer also allegedly offered the cat owner to buy her a new one instead.

The owner then decided to try and track the kidnapper’s mobile number but the Malaysian Communications and Multimedia Commission told her that they only work with investigating officers.

In expressing their concern, the Malaysia Animal Association hopes that the police would take the matter seriously before such cases become widespread since there is no decisive action was taken by the authorities.