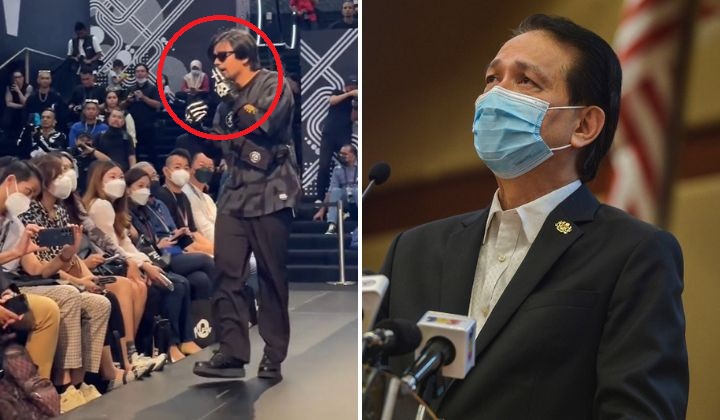 On Sunday (21 August), a singer from a local band Hujan, Noh Salleh, strutted on the Kuala Lumpur Fashion Week 2022 runway.

The 37-year-old indie singer caught attention because he allegedly held an unlit cigarette while modelling the clothes by a streetwear brand known as Super Sunday on the runway.

Some alluded that the cigarette added to the ‘bad boy’ look. However, there were also others who were uncomfortable with the look he portrayed and claimed that it reflected on his personal life.

According to Harian Metro, Noh Salleh and Mizz Nina recently finalised their divorce on 4 August. It was understood that they allegedly filed for divorce on 14 June.

KKM disapproves of the message portrayed

He said the act shows a bad example to society, especially to children and teenagers.

Hisham also urged everyone, including artists and celebrities, to help KKM’s efforts to eradicate smoking habits by making smoking an unacceptable culture in society.

His views received a mixed response from the public who pointed out the hypocrisy when it comes to ministers and the tobacco generational endgame (GEG) law.

Some believe the government should ban smoking altogether if a cigarette is genuinely harmful.

A netizen said he understood that it was a fashion statement but it should have been done discreetly because smoking is a taboo health subject.

Well said and i agree with it . I do understand that what is being portrayed is part of fashion . But since that this is a taboo health subject , sometimes things are better of displayed in discreet .

Previously, the proposed bill stated that children born in 2007 and the subsequent years will be prohibited from smoking, buying or possessing any type of smoking product.

The ban includes using, buying or owning any electronic cigarettes or vape products even after the children reach the age of 18.

If they are caught breaking the law, they can be fined up to RM5,000.