Behind all the glitz and glam, the runway models are not getting paid for their work. 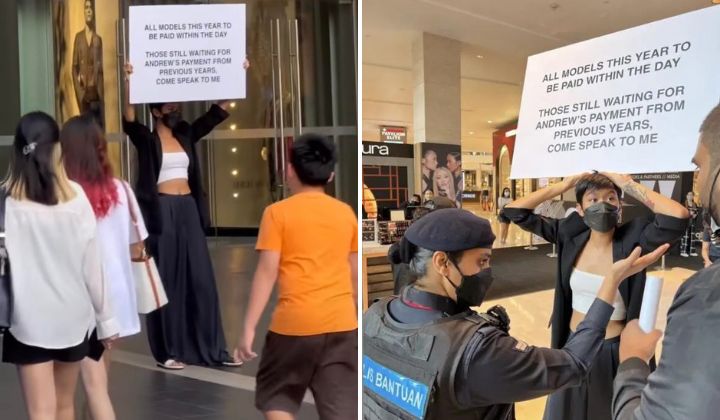 The annual event usually draws a large crowd who will flock to the venue just to look at models strutting the latest fashionable pieces.

However, this time the fashion show guests got some “tea” when a viral video on TikTok by Yelamango showed a model named Alicia Amin staging a protest at the event.

Based on the video, Alicia stood in front of the main entrance of the mall while holding a placard demanding models to be paid.

All models this year to be paid within the day. Those still waiting for Andrew’s payment from previous years, come speak to me.

Guards tried to remove her

The video also showed that the guards tried to get Alicia to leave. She also shared a video on InstaStory showing the guards telling her to leave the place.

Of course I’ll be chased away but we do what we can. To all KLFW models this year, let me know if they didn’t transfer money to your bank account within 24 hours after the show.

Alicia protested on her own accord

Alicia, who has been in the modelling industry for 12 years, said she’s tired of the issue of models going unpaid.

She decided to protest on her own accord so that her actions wouldn’t risk the careers and reputations of other people.

I can disagree and protest against terrible paymasters and still support my beloved designers who built my career because these two entities are not the same.

Alicia wrote on her InstaStory

She added that she wasn’t owed any money but she remembers how scary and isolating it was as a young freelancer trying to balance getting what’s rightfully hers and the opportunity to be booked again.

She has raised this issue in interviews

Alicia has raised the issue of KLFW failing to pay its models during an interview with Sinar Daily.

In the interview, she revealed that a lot of models still didn’t receive their pay.

In 2013, Alicia said she threatened to take legal action against the company when they refused to pay her for more than a year.

The company refused to cooperate until Alicia became more well-known in the industry in 2019.

Buzzkini, TRP’s sister site, has reached out to Andrew Tan, the founder of KLFW, to get his side of the story but has yet to receive a reply.

The founder of KL Fashion Week Andrew Tan has assured everyone that all models will be paid and that he will personally oversee all the finances.

READ MORE: “All Models Are Being Paid” Assures KLFW Founder