Those who bought Category 2 tickets felt scammed the most because they were so far away from the stage. 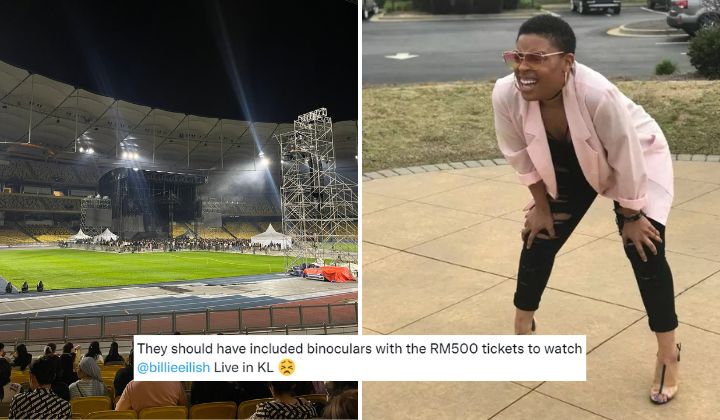 Fans of Billie Eilish were excited when they found out the singer and her brother, FINNEAS, were drift karting at Blastacars at Sungei Wang Plaza a day before her concert in Stadium Bukit Jalil.

While fans had fun during the concert, they also voiced disappointment regarding the seating arrangement at the concert.

Those who bought Category 2 tickets that cost RM508 were disappointed to find that they were very far from the stage.

Some of them lamented that they could barely see Billie Eilish and joked that the concert organizer should have provided binoculars.

They should have included binoculars with the RM500 tickets to watch @billieeilish Live in KL 😣 pic.twitter.com/OMaLeNC6Gr

There was also a tent covering the extended stage so fans could hardly spot the singer when she walked to that part of the stage.

Due to the poor view, a few of them said they felt cheated for spending so much money. A netizen Azfar @azfarheri said the concert experience was like watching a football match instead.

To make things worse, the sound system was allegedly bad and the audience could hardly hear what the singer said.

Was it down to poor management?

Aside from the poor seating arrangement, concertgoers also complained that it was poorly organised.

A few people also fainted while queueing under the hot sun to get into the stadium and an ambulance had to be called.

For future reference, some netizens were kind enough to provide sample pictures of other concerts that were organised well.

Netizens shared the different ways other concert organisers have arranged the seating and stage for music artists such as One Direction, Imagine Dragons and Kpop stars.

A netizen Wan Zul Effendi @wanzfnd compared the ticket price and the distance of the seats from the stage at Imagine Dragons that was held in Stadium Melawati, Shah Alam.

To rub salt into the wound, a netizen found a clip of Billie Eilish’s concert in Manila where the audience was much closer to the singer.

It was unfortunate that it was a less than ideal concert experience for many Malaysian fans.

Hopefully, lessons could be gained from this experience so improvements could be made for large-scale concerts in the future.