He played with a host of superstars including Dollah Salleh, Zainal Abidin Hassan, Fandi Ahmad, Alan Edward Davidson and Khairul Azman Mohamad back in the days 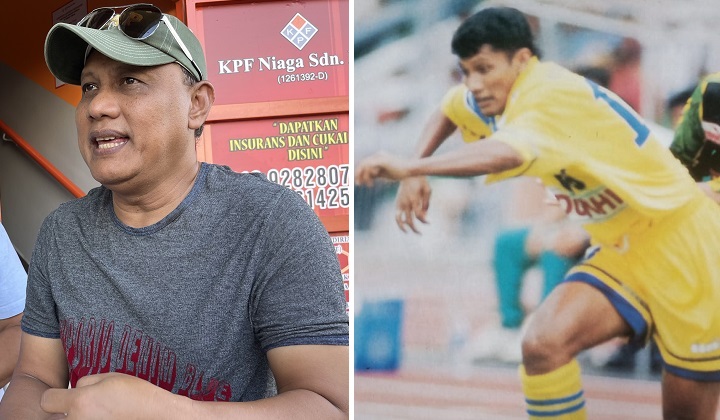 It took 26 years for Zulhamizan Zakaria’s record – the fastest goal scored in a Malaysian Cup final game – to be broken when Terengganu skipper and import striker Tchetche Kipre scored in the 46 seconds of the 2018 edition of the tournament.

Before that, Zulhamizan, the Pahang-born left winger was the record holder when he scored the solitary goal of the Malaysian Cup final game in the 1992 edition contested between Pahang and Kedah.

The nippy winger beat an offside trap following a long ball from the middle of the pitch and evading an onrushing Kedah’s goalkeeper Azmi Mahmud who failed to connect with the ball, before slotting the ball into an empty net in the second minute.

“Luckily Azmi’s size-12 boot did not landed on top of my head or else I might be sent to the hospital,” Zulhamizan said in jest when TRP met up with him recently in Kuantan, Pahang.

The sole goal of the game helps crown Pahang the Malaysian Cup champion in 1992.

That’s not the only trophy that the team won that year as Pahang had also won the Premier League, Sumbangsih Cup as well as the Fair Play Cup (now defunct) in that season.

“Subsequently, I got called up to the national team and we won the Indonesian Independence Cup in 92,” he said, recalling back the memory.

The Independence Cup was organised by the Football Association of Indonesia to commemorate the country’s independent day and was last held back in 2008.

Looking back, it must be stated that Zulhamizan had a short-lived but eventful career.

These now footballing icons were the core of the Pahang squad that was dubbed the “Dream Team”.

Back then, Zulhamizan was only 23 and would continue to become a mainstay in the Pahang team for five more years before his career was cut short by a persistent meniscus injury.

“I had undergone surgery on my knee but the injury remains there despite the operation that I needed to depend on painkillers to continue playing,” the now 53-year-old father of five children said.

As the injury persisted, Zulhamizan went back to the doctor where he was delivered the damning verdict.

“The doctor said to me that if I continue to depend on painkillers to further my footballing career, I will start having kidney complications when I reached 40.

“Upon deliberating, I decided to hang up my boots when I was only 28…at the peak of my career. It’s no longer about earning money but I don’t want to trouble my family for the rest of my life just to pursue my footballing career.”

He said that while it was not an easy decision, he believed that it was the right one since he had tasted success in every cup offered in the Malaysian football scene back then.

“I’ve had it all. Winning the league, scoring in the Malaysian Cup final, playing in the FA Cup…I think it’s sufficient.”

Despite retiring at an early age, Zulhamizan remains active in the local football scene, as he had successfully transitioned from a player to becoming a coach.

“As soon as I retired from playing, I began my coaching license and began coaching since I was 29.”

Wants to know more about Zulhamizan and his thoughts about our football scene? Read it on TRP in our next round of articles.