The decision was made by DBKL’s licensing committee in a meeting on 29 July. 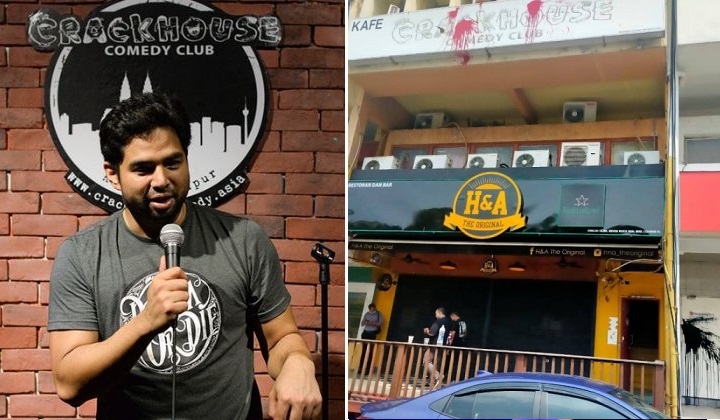 Kuala Lumpur City Hall (DBKL) had decided to revoke the Crackhouse Comedy Club’s license effective 30 July and permanently blacklisted its owner from registering any businesses for any premises inside the city.

According to Berita Harian, the decision was made by DBKL’s licensing committee in a meeting on 29 July.

“In fact, we also decided to blacklist the owner of this club from registering a business license in Kuala Lumpur forever.

“This means that the owner of the club cannot register any business activity in Kuala Lumpur even if using a different name and company,” Deputy Federal Territories Minister Datuk Seri Jalaluddin Alias was quoted as saying.

Jalaludin said this in a press conference after leading a joint operation at the Selayang Market today.

He also said that the city’s authority body also monitoring several clubs suspected of flaunting their license and permit of operation.

“For those who violate the licensing conditions, then they will not be spared from strict action,” he said, adding that DBKL will continue to monitor and carry out inspections periodically.

“At the same time, actions, monitoring and inspections will be carried out periodically by DBKL because we do not out on our actions,” he said.

The videos of Rizal’s past stand-up routines resurfaced following a viral video of a woman claiming to be a Muslim and to have memorised 15 juzuk (chapters) of the Quran before stripping off her headscarf and baju kurung to reveal her skimpy clothing during an open-mic routine at the club in June.

Subsequently, the comedy club was ordered to be temporarily shut down after the authorities found that it has been operating without an entertainment license.

Meanwhile, the woman, Siti Nuramira Abdullah was charged with insulting Islam at the Kuala Lumpur Sessions Court on 13 July.

Her boyfriend, Alexander Navin Vijayachandrana, a freelance writer, was charged at the Petaling Jaya sessions court with two charges under Section 233 of the Communications and Multimedia Act 1998, for improper use of network facilities by making and initiating the transmission of offensive videos.

Netizens however were left baffled by DBKL’s decision, questioning why the owner was banned for life from operating any businesses inside Kuala Lumpur, with some of them urging the club’s owner to lawyer up and challenge the decision.

When we have politically appointed mayors and city councilors, this is what we get. The owner should probably consider legal avenues.

wow, it is ridiculous and extremely disproportionate. This should be challenged and overturned. Plus he should sue the dodgy duo that caused this

However, there are also those who believe that it was the right decision from DBKL as the Comedy Crackhouse Club fiasco shouldn’t be allowed to repeat in the future.

Lesson: Those who dabble with fire will only get burnt.

Fair enough. Insulting religion should never be taken lightly, no matter which believes you practice

For others, the club’s owner can simply operate another business in several areas in Selangor which is located a stone’s throw away from Kuala Lumpur.

nvm just move across the road to Bandar Utama . In Selangor already !