All 19 victims were rescued by a team of firefighters that was dispatched to the scene in an incident last Saturday. 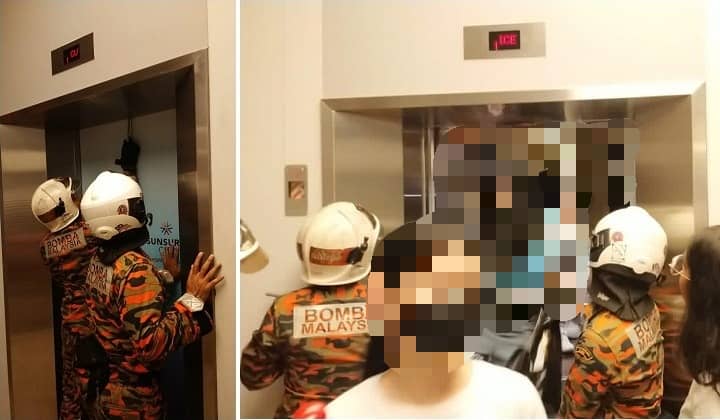 19 private college students in Kota Damansara can count their lucky stars as they escaped a malfunctioned lift without any injury.

In a Facebook posting yesterday, the Sungai Buloh Fire and Rescue Department shared a video of a rescue operation which occurred on Saturday – to remind the public, not to overload when riding in a lift.

Inside the video, one of the firefighters can be heard communicating to a person, who is believed to be in charge of the students, asking her at what level is the lift stuck in.

Another firefighter can be seen opening the out-of-order lift’s door with a key before helping the trapped college students – all females – get out of the lift that was stuck between the first and ground floor.

One of the victims almost loses her consciousness due to the incident.

“Excessive loads will cause the lift to malfunction even if the overload warning sound was not emitted.

“It is advisable to be patient and to use the lift properly to avoid any unwarranted mishaps from taking place,” the Sungai Buloh Fire and Rescue Department wrote in its posting.

They also warned the public that it is possible for victims that were trapped in a lift to suffocate and lose their consciousness due to the heat and lack of oxygen.

Responding to the incidents, netizens were baffled at the poor decision-making of the victims but applauds the department’s swift action in saving them.