The debris looked small but the force was enough to punch a hole through the zinc roof. 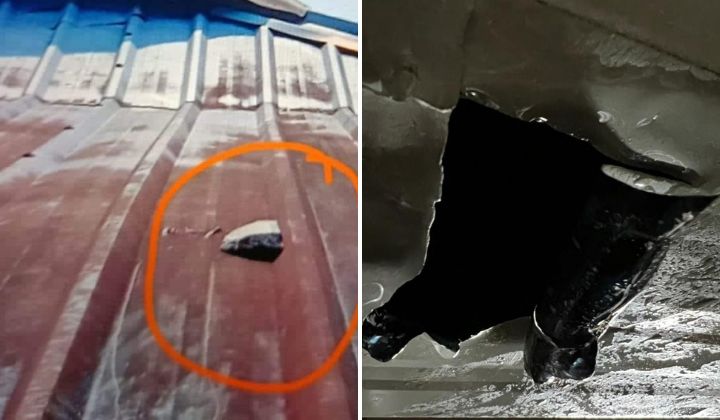 A piece believed to be from China’s Long March 5B rocket was found lodged in the roof of a home in Rumah Panjang Renyam in Sungai Asan Bayu, Sibu, yesterday night (13 August).

The homeowner thinks the rocket piece had been lodged on the roof for a few weeks. Based on a police report made at Sungai Merah police station, his neighbour heard a loud crash at his house on 30 July.

He only realized the hole in the roof yesterday when he dropped by the house and saw it was leaking.

According to Kosmo, he contacted the authorities right after spotting it. Bintangor Bomba received a call about the find around 8.50pm.

The rocket piece measured two inches wide and three inches long. It was found lodged in the wooden beams on the roof.

The rocket piece had been passed to the police for investigation.

Previously, some debris allegedly from the Long March rocket was found in Kampung Nyalau, Bintulu, and Kampung Sepupok in Miri, on 1 August.

The Science, Technology and Innovation Ministry confirmed that the debris wasn’t radioactive and did not emit any radiation.

When did the rocket enter the Earth’s atmosphere?

On 31 July, the Chinese Long March rocket re-entered the Earth’s atmosphere over the Indian Ocean around 12.45am.

The rocket blasted off on 24 July to deliver a laboratory module to the new Chinese space station under construction in orbit.

A few people in Sarawak managed to spot the burning debris in the sky, thinking it was a meteor before knowing what it truly was.

The Malaysian Space Agency (MYSA) stated that some of the smaller debris fell around the Sulu Sea.