The victim and some of her schoolmates have been harassed since June 2022 and it shows no stopping. 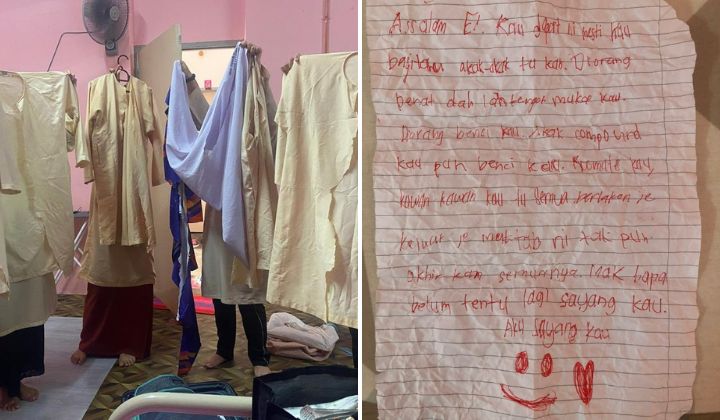 A 14-year-old girl studying in a MARA Junior Science College (MRSM) in Kuantan has been harassed by an unknown person since June 2022 until now.

Someone kept cutting up her school uniforms that were hung outside to dry, scribbled on the bathroom walls and even wrote a threatening note to her.

The last straw was when the girl and her roommates woke up to discover someone had cut their hair short while they slept.

However, the girl’s mother, Nazrah Mohamed, claimed that no actions had been taken by the school management and wardens to solve the harrowing issue.

In fact, the school allegedly accused her daughter of being the perpetrator when she kept reporting the incidences to them.

Nazrah also discovered that other students staying in the same block as her daughter faces similar harassment as well.

According to Sinar Harian, Nazrah said it was unacceptable that no action was taken until today. She hopes the matter will be resolved soon and will not hesitate to take legal action.

Is MRSM Kuantan waiting for lives to be lost before they take action?

On Friday (17 June 2022), her daughter’s blue school uniform and a senior’s batik shirt that were hung outside to dry were scribbled on.

After reporting to a Form 5 senior, a roll call was held to find the culprit but they couldn’t find who did it.

On Sunday (19 June), her daughter found her yellow school uniform with the sleeves cut off. When she reported to the seniors, they said they would try to investigate on their own first before reporting to the warden.

After checking with the students, the chief warden confirmed that they were trying to solve the case on their own. Nazrah questioned whether it’s normal for the school to leave these things up to kids to solve.

The harassment continued and the perpetrator kept getting away with it. Her daughter’s blue school uniform and another student’s PJ shirt were scribbled on 26 June.

On the same day, the walls of the bathroom were scribbled on and it was reported to the warden.

However, five wardens called up her daughter and accused her of doing all the pranks. They allegedly pressured her to admit to the acts.

On 3 July, her daughter’s roommate found the slippers outside arranged in a snake-like pattern and the bathroom door was scribbled on. Once again, they reported the matter to a senior.

Nazrah phoned the vice principal of student development (TPPP) to follow up on the case on 14 July (Thursday).

Meeting with the school management

On 22 July, Nazrah met with the principal, vice principal, chief warden, school counsellor and another warden to discuss the matter.

The principal admitted that they made a mistake. However, Nazrah said the statement from everyone wasn’t consistent.

Feeling displeased with the meeting outcome, Nazrah lodged a police report against the school management and also filed a complaint with SISPAA under the Education Ministry.

On 7 August, a group of seniors found five blue shirts that were cut up. The next day, they found five yellow school uniforms, including Nazrah’s daughter’s tudung, were cut up.

On the same night, a Form 3 student, who stays in the same dorm, found a threatening note addressed to Nazrah’s daughter.

The harassment then escalated on 12 August when her daughter and her roommates woke up to find that someone had cut their hair short in the night.

Nazrah said she still hasn’t received any updates from the school and police.