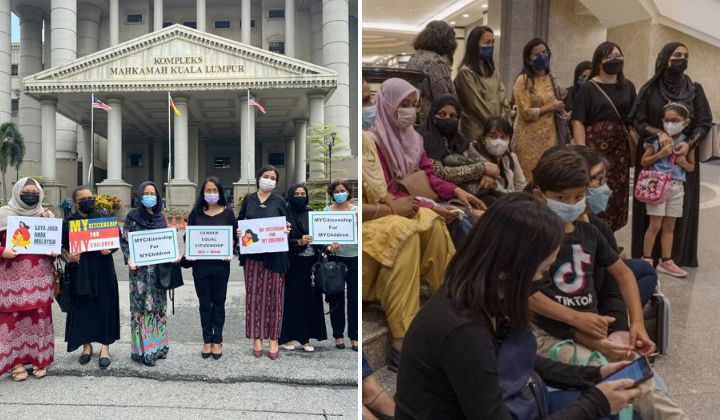 On 5 August, the Court of Appeal has decided in a 2-1 majority ruling that children born overseas to Malaysian women married to foreign spouses are not entitled to be Malaysian citizens by operation of law.

The decision was reached after an appeal by the government, Home Ministry and National Registration Department director-general against the High Court decision.

According to Malay Mail, this decision overturned a High Court ruling on 9 September 2021 that enabled Malaysian mothers to pass on their citizenship to their overseas-born children.

The Association of Family Support & Welfare Selangor & Kuala Lumpur (Family Frontiers) president Suriani Kempe said the outcome was disappointing but still, the association would continue to fight for women’s rights.

We stand firm in the belief that one day our government will see us, Malaysian women, as equal citizens, and that our children have just as much a right as the children of Malaysian men. This is indeed a setback, but we will not be deterred. We will appeal the decision at the Federal Court.

Family Frontier’s lawyer Datuk Seri Gurdial Singh Nijar said the dissenting judge said there was discrimination which was illogical, perverse and degraded the dignity of women.

Gurdial said he would request a full bench in the apex court.

Criticisms against the ruling

One of the mothers affected by the overturning of the ruling, Mashithah Abdul Halim, said the court’s decision smears the dignity of Malaysian women.

Today’s decision has ripped my heart out as a woman and a mother. It smears the dignity of Malaysian women. Are we women so worthless in the eyes of the country?

Another affected mother, Adlyn Adam Teoh, asked why the government doesn’t protect all of its citizens, both men and women, equally.

Why doesn’t our government protect all of its citizens, both men and women? Why the bias towards women citizens? The reality is that the current interpretation of the law and associated policies bring hardship to each family. And remember, we are Malaysian, and proudly so. We will continue to seek to end this discrimination against half of our population, against the daughters of Malaysia.

Patricia, an affected mother who is part of the Family Frontier’s network, said they will continue to fight because the pressing matter affects the lives, well-being, and future of their children.

Women’s rights activist Ivy Josiah said it was unacceptable that mothers are not deemed equal to fathers.

We understand there is majority bipartisan support from parliamentarians to recognise equal citizenship. Hopefully, MPs can rectify this discrimination against Malaysian mothers.

This is regressive and takes the country back to the Stone Age as far as women’s rights are concerned. This judgment doesn’t just undermine women’s equal citizenship rights but has adverse consequences on their childrens’ rights to education, healthcare, freedom of movement and inheritance.

A proposal to give Malaysian women the same rights as men

Based on a report by Malaysiakini, DAP proposed that Prime Minister Ismail Sabri Yaakob table a motion to amend the Federal Constitution to give Malaysian women the same right as men when it comes to passing citizenship to their offspring.

Currently, children born to Malaysian fathers with foreign spouses abroad can be given automatic citizenship.

Malaysian women married to foreign spouses will have to apply for Malaysian citizenship for their children. Between 2018 and 2022, only 19 of 3,407 applications or less than 1% of the applications were approved.

DAP secretary-general Anthony Loke said denying women from automatically passing Malaysian citizenship to their children is an injustice and it goes against the principle of gender equality.

This makes it look like a mother has fewer rights compared to a father. It goes against the principle of gender equality as enshrined in international laws and the Federal Constitution. Every child is brought into this world by their mother. Such injustice will bring negative effects to the family institution.

The current ruling would many children stateless while others had to take up foreign citizenship.

Loke added all 42 DAP MPs will support the motion and believes its allies in Pakatan Harapan would do the same.

Netizens online also decry the current decision by the Court of Appeal.

Dr Imelda Balchin, who is married to a foreign spouse but was lucky enough to gain Malaysian citizenship for her children, voiced her heartbreak.

It is a sad day because I realised, in this modern world, despite Malaysia’s aspiration to become a developed nation, it is still very far behind in their support and protection for their women.

Independent broadcast journalist Tehmina Kaoosji shared her disappointment and her experience as an adult child of a Malaysian mother who was born overseas.

This was my childhood, teens & early 20’s- up & down JPN Shah Alam,Putrajaya with my 🇲🇾 Mom:
• getting student visa extensions then social visit passes
• processing endless paperwork while dealing w abuse, xenophobia from officers.

[Watch] Boy Fell While Running With Toothbrush In Mouth, It Lodged In His Inner Cheek