The second factory measuring 22,000 square metres will further open up job opportunities for locals in Kelantan. 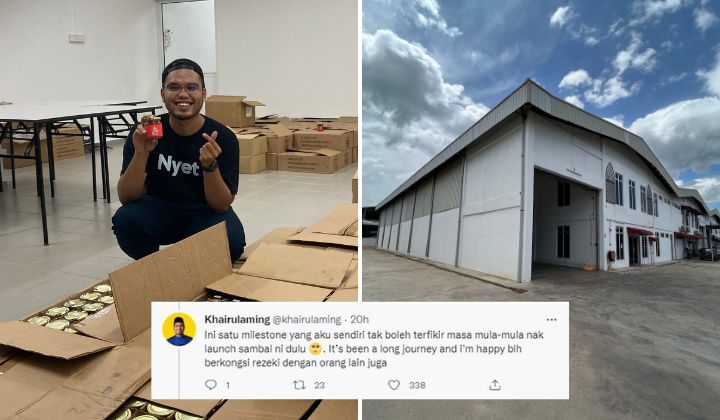 Sambal Nyet was first sold on Shopee under the Khairulaming Brand on 6 January 2021 and it was a hit with many customers.

The sambal still remains a favourite among many customers and keeps selling out within minutes.

Khairulaming managed to sell 1 million bottles of Sambal Nyet since its launch and made a total profit of RM14 million.

He reinvested the profits to open a second factory in Kelantan measuring 22,000 square feet.

Early challenges in a new business

When Khairulaming first started his business venture last January, he shared with his followers that there were challenges and mistakes made.

Since it was a small and new business then, they only opened reservations for 10,000 bottles and it took ten days to pack each order.

Three months after earning RM1 million from their first sale, he reinvested the money to open the first factory measuring 14,000 square feet in Kelantan.

During that time, he also made several mistakes as an entrepreneur but he learned from them and powered through.

One of the mistakes that were made included ordering the wrong machines.

The situation was made tougher when the pandemic hit and he had to reduce the number of workers down to 75% to ensure everyone’s health and safety.

With a low number of employees working, the production in the factory was put on hold and the factory could only operate at a minimal level.

Once the country slowly recovered from the pandemic, Khairulaming was able to bring in new and upgraded machines to manufacture his sambal efficiently.

He became an inspiration to many

Khairulaming’s openness to share his entrepreneurial journey online has served as an inspiration to many.

Many netizens congratulated and wished him the best of luck for his continual success.

They were excited to hear that he managed to open the second factory in Kelantan which would provide job opportunities for the locals too.

Some netizens lamented that they have yet to try the popular sambal since Sambal Nyet is always sold out fast.

They even joked that he was on track to become Kelantan’s next Menteri Besar.

In return, Khairulaming expressed how grateful and thankful he was for all the support he received throughout his journey.

Thank you so much kepada semua yang menyokong dari awal launching dulu sampai ke hari ni. Thank you for being part of the journey. Will keep you guys updated on the upcoming progress 😇 pic.twitter.com/mSEnO11Boy