One of the dancers is suspected of suffering a spinal cord injury while the other dancer is in stable condition. 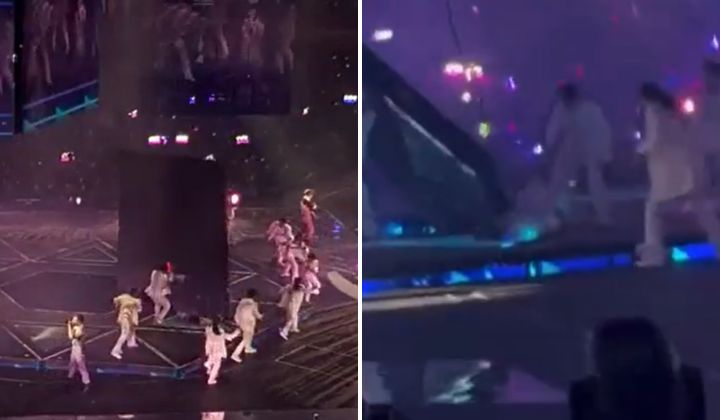 A giant screen fell onto the stage during a performance by popular canto-pop group Mirror in Hong Kong today (29 July).

The videos that have gone viral showed the screen precariously hanging before plunging into a backup dancer and burying others nearby.

One of the dancers could also be seen trying to push away the heavy screen after it fell on another dancer.

The victims were rushed to Queen Elizabeth Hospital. Bloomberg reported that three audience members were treated for shock.

According to Hong Kong media Ming Pao, one of the dancers was in serious condition and suspected of suffering a spinal cord injury. The other dancer was in a stable condition.

All 12 members of Mirror were not injured in the incident. The hugely popular Cantopop group was formed in 2018 through a reality television show. The group had planned a series of 12 shows at Hong Kong’s Coliseum, next to the city’s Victoria harbour.

I am shocked by the incident. I express sympathy to those who were injured and hope that they would recover soon.

Lee added that the government would investigate and review safety procedures to protect performers, staff and the public.

According to The Star, Kevin Yeung, the city’s Culture Secretary, said the show would be suspended until the stage structure is deemed safe.

This incident has also caused the band’s concert tour to be postponed for the time being, which was supposed to go on until 6 August.

The Malay Mail reported that fans of Mirror have started a petition addressed to the concert organisers, MakerVille, to resolve the safety issues and protect all performers.

Reports indicated that more than 13,000 fans have signed the online petition.

MakerVille, the concert organiser owned by Hong Kong tycoon Richard Li’s PCCW Media Group, is thoroughly investigating the cause of the accident.

We are deeply sorry that the incident caused unease to viewers or others affected.