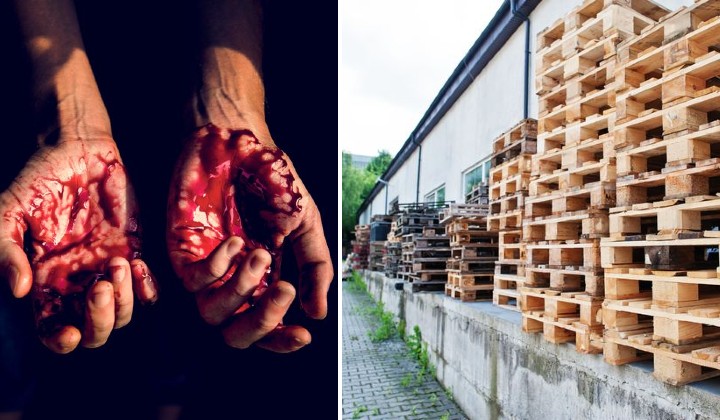 A Singaporean packer was jailed for throwing a 23kg wooden pallet at his colleague for reporting his mistakes, reported the Malay Mail.

40-year-old Mohammed Fauzie Juraimi was angry at his 16-year-old part-time packer colleague, who had went to management over a mistake Fauzie made at work.

Incensed, Fauzie threw a wooden pallet weighing 23kg at the back of the teen’s head. Upon impact, the teen immediately began bleeding from his head wound and felt dizzy.

Fauzie then pretended it was an accident, giving the teen $10 (RM32.20) to buy painkillers for the wound.

A pallet to the head

However, Fauzie later confessed to the assault. On 28 July, he pleaded guilty to voluntarily causing hurt to the victim by using a weapon likely to cause death. He was sent to jail for just 3 months, even though the sentence could have been worse. Fauzie could have been jailed for up to seven years, fined, caned, or punished with any combination of the three.

According to CCTV footage taken from the warehouse in Jurong in January, Fauzie waited for the boy to pass by before hoisting the wooden pallet over his head and walking towards him. As the boy was shifting some pallets, Fauzie charged at him from the back and tossed the pallet at the teen’s head.

The teen turned around and saw Fauzie, who claimed the incident to be an accident.

At this time, the warehouse safety officer approched to help the victim sit down. Fauzie said sorry, placed a $10 bill on the teen’s lap for Panadol pills, and left. The teen left the money on a table and did not take it.

Later on, the safety officer called the police and the victim was brought to Ng Teng Fong General Hospital. He did not require any sutures and was given three days of medical leave.

It turns out that the teen had reported Fauzie over a work safety violation.

A week before the attack, Fauzie had failed to properly secure the batteries of a pallet jack, causing the batteries. The teenage packer saw this and reported it told the company management.

Because the warehouse’s work safety rules stated that all workers were banned from using their bare hands to move pallets due to their weight and had to use pallet jacks to do so, Fauzie was then suspended from using a pallet jack for two weeks.

Due to this suspension, the turned his anger towards the messenger, his teenage colleague.