The dashcam footage of the police escort endangering road users has gone viral over social media. 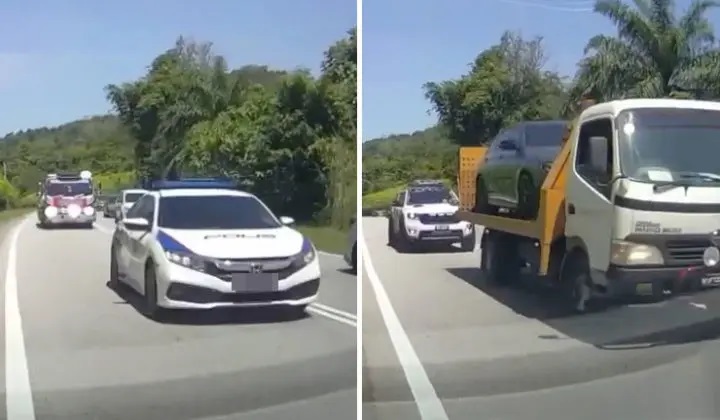 Dashcam footage of police escorting two luxury cars on flatbed trucks and endangering road users by overtaking a train of traffic on a double line went viral over social media recently, with netizens lamenting the professionalism of the police force.

The video was first uploaded by Facebook user Hamdan Zakaria, who questions whether the police will be at fault if an accident were to happen since the convoy was in the wrong way when he encountered them.

Inside the video, it can be seen that Hamdan was driving without any traffic in front of him when suddenly a Royal Malaysia Police (PDRM) Honda Civic police car overtake a host of cars in the opposite lane which forced him to slow down and steered toward the grass on the side of the road.

Behind the Honda Civic, are two flatbed trucks ferrying luxury cars which were followed by a white Ford Ranger.

The video was subsequently uploaded onto Twitter by @jilmisai with the caption “Congratulations PDRM..Just put aside the people’s safety.”

The Twitter user questions whose luxury cars it belongs to that warrant a front and rear escort and also the urgency that requires the convoy to overtake on double lines and endanger others on the road.

The video had since been retweeted 21,500 times by netizens at the point of writing.

@jilmisai also shared another video of a similar incident at a different location.

Netizens who responded to the tweet said that the outrider’s actions are dangerous and could cause an accident especially if they encountered a panicked driver.

There are also those who point out that it is not only dangerous but also illegal to overtake on double lines, which is an offence under Road Traffic Rules 1959 and carries a fine of RM300.

PDRM: Police Escorting Luxury Cars In Kelantan Were On Duty