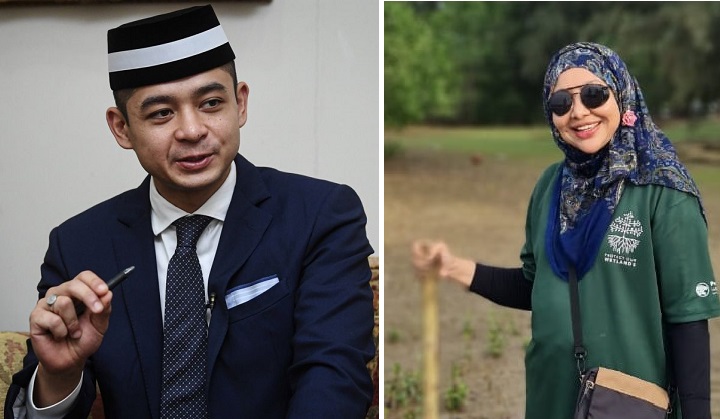 Pahang Regent Pahang Tengku Hassanal Ibrahim Alam Shah Al-Sultan Abdullah Ri’ayatudin Al-Mustafa Billah Shah had called the police to stop the investigation against Pahang Malaysian Nature Society (MNS) chief for allegedly insulting him in a Tweet that had since been deleted.

In his Instagram story, Tengku Hassanal urged the police to leave her alone after finding out that Noor Jehan Abu Bakar was called in by the police to record her statement after police reports were lodged against her.

“I just found out about this, I’ve asked the police to leave her alone.

“Please don’t create drama,” he was quoted by The Star.

The Pahang regent had also apologised to Noor Jehan for being late to the event, stating that he was not feeling well on the morning of the event and had to take precautions for everyone’s safety.

In a Twitter thread yesterday, Noor Jehan said that she was called to the Kuantan district police headquarters to record her statement over a Twitter post that allegedly insulted the Pahang regent which was posted on 18 July.

She allegedly claimed that the Pahang regent and several other high-ranking officers were two hours late for the Buffer Zone Ecosystem Restoration Programme which was held in Pantai Chenor, Kemaman, Terengganu on the same date.

Several people saw red to her Twitter post and police reports were subsequently lodged against Noor Jehan for tarnishing the image of the Pahang regent, as well as the tree-planting event organizer, Tenaga Nasional Berhad (TNB) and the Kuantan City Council.

Noor Jehan was being investigated under Section 233 of the Communications and Multimedia Act 1998 as involving the misuse of communications networks well as Section 500 and 505(b) of the Penal Code for defamatory statements.

If found guilty of both offences, Noor Jehan may face imprisonment terms and also a fine or both.

Meanwhile, Kuantan district police chief Wan Mohd Zahari Wan Busu said that the police took note of Tengku Hasanal’s wish for Noor Jehan to be left alone and will leave it to the deputy public prosecutor to decide the next action.

“We will be referring the case to the deputy public prosecutor for a decision (on the case).

“Looking at the statement (by Tengku Hassanal), it looks like he does not want to prolong the matter, so we are okay,” he was quoted by The Vibes.

[UPDATED] Power Cut? It’s Not Just You. Malaysians Report Blackouts Across The Country