The woman warned the child not to spill the food and to swallow everything while threatening the child with a stick. 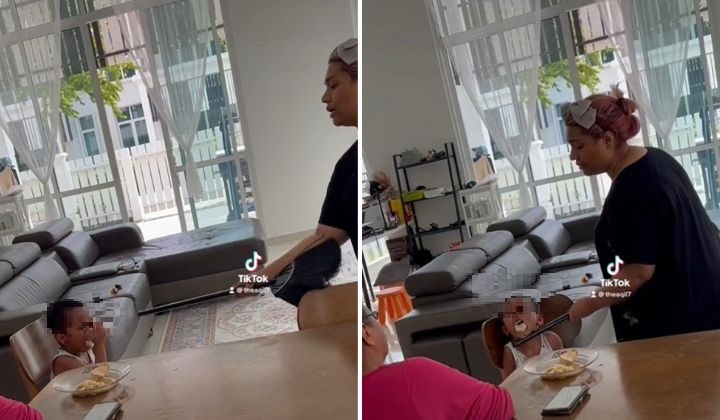 People were shocked at a viral video showing a pink-haired woman hitting a child with a broomstick.

The woman kept warning the child that she will get hit if she spilt the food. The girl kept crying with food in her mouth and it was clear that she couldn’t finish eating.

The woman also pressed the end of the broomstick against the child’s neck and asked her to swallow her food.

The Vibes reported that Kajang district police chief Assistant Commissioner Mohd Zaid Hassan said the police were alerted of the case after receiving a report at 12.14am today (22 July).

The child is believed to be four years old and is an adoptive child of the couple. The child abuse incident is believed to have occurred on 18 July in a house in Beranang, Selangor.

The person who recorded the video, Aqil, 20, claimed that a husband and wife couple abused their foster child.

The girl was allegedly beaten with a hanger, and broomstick and burnt with a cigarette lighter. She was also alleged to be a hyperactive child, Free Malaysia Today reported.

Upon receiving the report, the police rescued the victim at 2.30am and arrested a Malay woman and a Singaporean man from the house.

The suspects aged between 28 and 30 have been remanded for seven days until 28 July to assist in investigations under Section 31(1)(a) of the Child Act 2001.

The victim was taken to Kajang Hospital, where a doctor confirmed the injuries were on several parts of the victim’s body.

It was later revealed that the victim is allegedly an Indonesian and doesn’t possess any birth or identification records.

The victim’s biological mother handed her over to the suspects in April because they couldn’t afford to raise a daughter any longer.

Initial investigations revealed that the victim didn’t like to eat rice but was forced by the suspect to swallow the food, which resulted in the victim vomiting.

Anyone with more information is urged to contact the investigating officer, Inspector Suresh Krishnan at 017-433 3795 or contact the nearest police station.