The man didn’t stop running in the hot sun even when his slippers fell off. 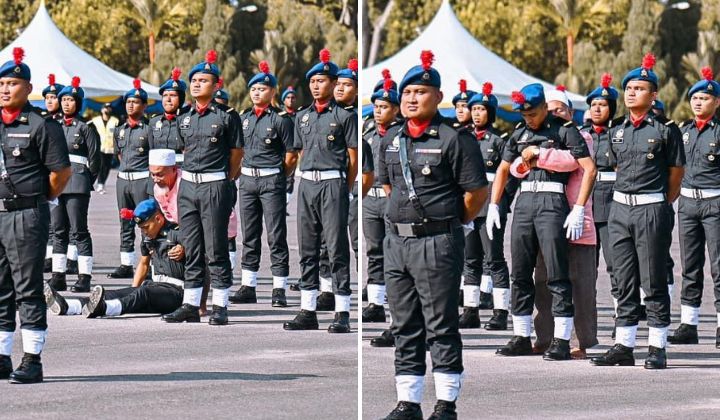 It was a touching moment for many people when they witnessed a man running toward an officer who fainted during the Enforcement Day parade at Maktab Penjara Kajang.

The older man hoisted the younger man up and stood behind him to ensure he didn’t fall again.

According to Sinar Harian, the young man who fainted is a Domestic Trade and Consumer Affairs Ministry (KPDNHEP) officer named Nik Mohamad Adhar Nik Ismail, 22, who took part in the parade.

He developed a fever three days ago and fainted during the parade on Thursday (21 July) because he has still not recovered.

The man who ran bare feet in the hot sun to hold him up was his uncle, Abdul Aziz Ya’acob, who he regarded as his own father.

Nik Mohamad is an orphan and has been cared for by his 60-year-old uncle and his wife Rosmawati Ismail, 53, since he was three months old.

Although he was only their nephew, Nik Mohamad said his uncle and aunt treated him the same as their other six children.

Nik Mohamad hails from Tumpat, Kelantan, and was stationed for duty in Tawau, Sabah.

KPDNHEP Minister Datuk Seri Alexander Nanta Linggi, who witnessed the touching father and son moment at the parade, wrote on Facebook that he couldn’t hold back his tears.

He shared that Nik Mohamad’s uncle continued sprinting across the road on bare feet when his slippers fell off to hold up his adoptive son.