The policeman is bleeding in the brain and is still unconscious. 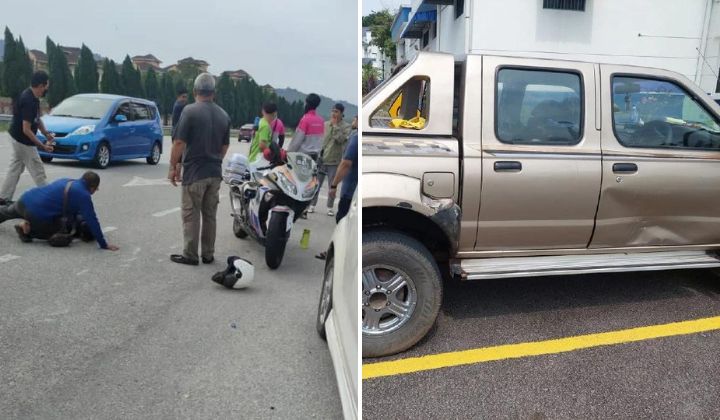 A policeman attached to Kulim Hi-Tech police station got injured in the line of duty when a pickup truck driver rammed into him in an attempt to escape from the cops yesterday (16 July).

Khairul is married and shares a 9-year-old child with his wife. He has served in the police force for nine years.

He is hospitalised in the red zone in Hospital Kulim due to the extensive head bleeding and is reportedly still unconscious.

In the 9.20am incident, Khairul and his colleague were chasing a male driver of a Nissan Frontier.

The witness saw the driver hit a policeman until the victim fell off the bike. The witness then chased the suspect heading towards Pekan Kulim before making his way to Bukit Mertajam via Machang Bubok.

During the chase, the suspect knocked into some cars and drove dangerously. The chase continued past Sungai Dua Highway, turning into Bagan Jermal in Seberang Perai before the suspect met a dead end in a housing area.

The 45-year-old suspect hails from Sungai Petani and possesses three criminal records. The suspect also tested positive for drugs in a urine test.

The suspect is also being investigated under Section 6(1) of the Road Transport Act 1987 for modifying vehicles.